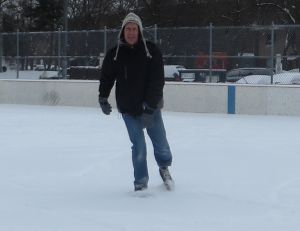 skating in the snow, happy as can be

At 10 a.m. the rink has not been cleared of about 5 cm of snow from last night. A young building attendant is just arriving and unlocking the change room. He says maybe the rink will never be cleared at all today because it might snow again, and if so, what's the use?

But there is one skater, making figures of eight in the snow. He says an unploughed rink is good too -- it make falling easier (softer).

At 7 pm the city's website lists this rink as "operational." But in fact it has over a foot of snow on it. A building attendant and two friends are sitting inside. The walk is not shoveled either -- the building attendant says their shovel disappeared some time ago, so he has no equipment for clearing the walkway. He doesn't know whether he'll be getting another shovel, and he doesn't know whether any plough or zamboni will be coming by tonight. There's no phone in the building, and it looks so run down. 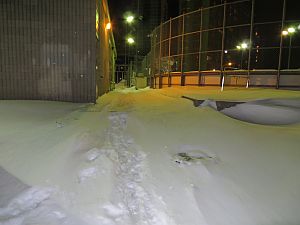 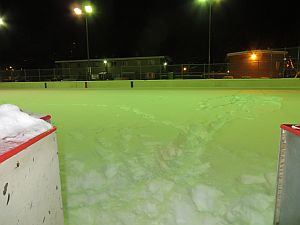 At 9.10 am, the ice was open but the rink house was locked. There was maybe about a good inch of solid ice. No staff, and no skaters either -- and no sign on the rink announcing the opening day. A couple of mats were piled up in front of the door, ready to be laid out between the change room and the rink -- but it looked as though there might not be enough to reach.

The rink, as usual, had a lot of leaves under the ice. The rink supervisor came by and said they were going to have to get some cars towed away, which had parked in front of the rink gate. That meant the staff couldn't get the leaf cleaner in, nor the zamboni.

But the ice looked good anyway, and sooner or later it will be discovered by some skaters... 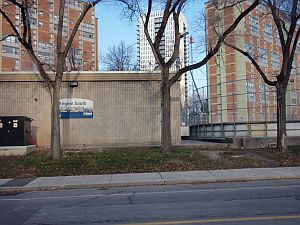 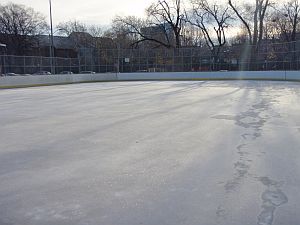