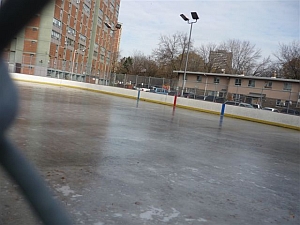 ice with leaves frozen in

10:45 am: there was no one there that I could talk to. I could hear the compressors running, there are mats out from the dressing room to the ice, and the dressing room has mats & benches, looks ready for the season. There was a layer of ice down, but still thin enough that I could see through to the cracks in the concrete. There were a lot of leaves frozen into the ice at both ends. 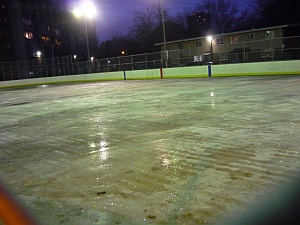 more work to be done on this rink

there were two workers there who said it was cold enough to flood more, they'd do that soon & then there would be no midnight flood. They thought it should be ready by the weekend, weather permitting. They said the rink had been ready last Sunday but then the warm weather & rain melted the ice. The change room is open and looks ready but there's no signs up anywhere saying when the rink will open.

Last week a city planner said he had been told that Regent South Rink is only open when there's a permit or a school comes. So we went to check. There were two adults playing shinny on the ice, the zamboni was just filling with water, and inside there was a building attendant. The attendant said that the rink is open from 10am to 10pm Monday to Friday, and 10am to 6pm on Saturday and Sunday. They used to be open until 10pm on Saturday but then there was a shooting somewhere in the neighbourhood and the supervisor had changed the schedule to close at 6. The reason given was "staff safety" but the rink attendant said it might have been a good excuse, to save on staff costs. 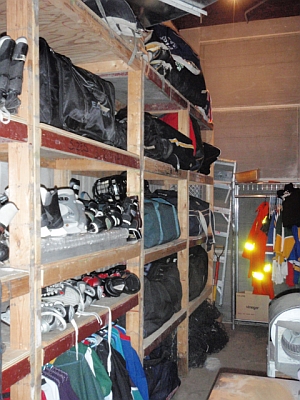 The rink attendant said they've had a pretty good season, but they've had fewer kids coming because so many of the Regent Park buildings are being torn down. There was again a problem with the roof leaking which she said was finally fixed a month ago. Apparently the previous-years' fixes didn't work and during the summer there was a lot of leakage which no one noticed because the building is only used in the winter. So the floor tiles had lifted up and had to be redone.

The rink attendant says that although North Regent Rink is open, almost no one uses it and women are not allowed to work there because the rink house is a "dungeon" and it's considered unsafe.

We asked about the Regent South skate collection. She said it's still there but only the supervisor can get in there. The attendant said the skates are just quietly rusting in there -- they get no use and nobody asks to borrow them.