You are on the [AdultFriendlySkateMar12018] page of folder [Regent South Rink]

The poster is here.

This event was announced an "adult friendly evening on the ice: REGENT PARK 80s and 90s skate night."

This time there were posters up at the rink, and management staff and the city councillor attended. There were plenty of skate aids, apparently moved over from some nearby rinks that had closed for the season. There were cookies and hot chocolate as well as the DJ music. 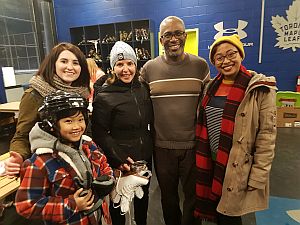 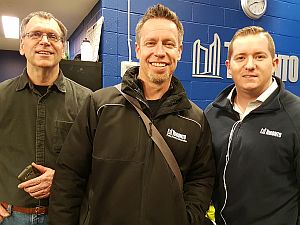 The scene seemed to be more families than adult groups of friends. There were two skate-helpers from the Meridian Credit Union. At the time when we visited, the leisure-skate coordinator was out on the ice helping kids skate. We asked if he could train the regular rink guards to be helpful to new skaters, but he said no, only skate instructors could help out, since some of the rink guards weren't very good skaters either. 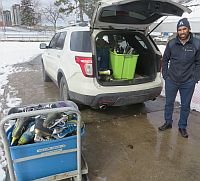 Matt Cutler, from the Parks and Rec general manager's office, said that a staff committee would be looking at how there could be more skate lending at city facilities. As a follow-up to some media coverage of the event and of skate lending, Matt had emailed us earlier in the day that the city would be willing to accept the CELOS loaner skate collection if CELOS would like to "donate the collection to the City for a pop-up / occasional skate lending program."

And so that's what CELOS did. And even before the event was over, some skater Friends of Regent Park said they'll try to get at the front of the line to book a "pop-up" week or two of skate lending that includes Family Day next rink season.