You are on the [cover page] of folder [Regent North Rink]

You are in the Regent North Rink folder

This rink has been removed.

Rink change area: The rink change area was a bit confusing to navigate and too small to accomodate more than 8 people at a time. To get inside skaters had to go through two unmarked doors, (first they had to squeeze by extra hockey nets stored in the anteroom), and just past the desk of the rink guard was the windowless change area. The message seemed to be "you live in the projects."

Staff: Staff were knowledgeable and friendly.

Maintenance: Flying squad and a reported one visit a day, usually in the mornings. 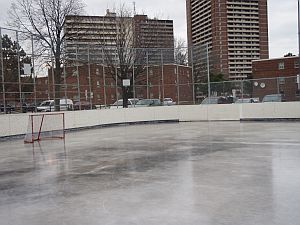 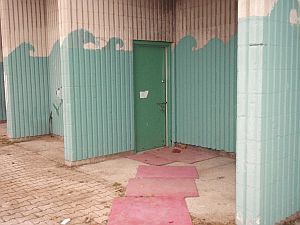 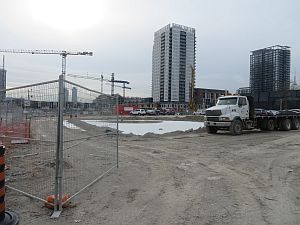 the rink is gone, but there's a big icy puddle

A building is being put up beside the hole that was formerly Regent North Rink. There's a hose running from the construction site into the hollow where the rink was, to drain off some water. Because of the cold temperatures the drainage water has frozen and once again, it looks like there's a rink there. A construction guy told me "my buddies say they're going to fucking go skating there." 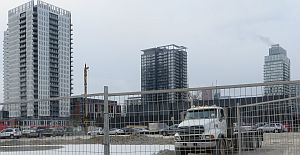 so many new buildings 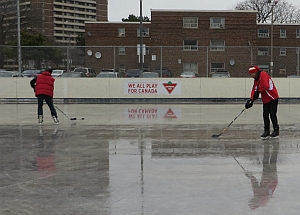 At 1 pm the ice was watery on top. The building attendant said the zamboni was there at 10.30 -- two and a half hours later the rink was still watery! There were seven skaters and they were not happy.

Perhaps the zamboni driver put on much too much water. The same crew goes to Ryerson, and it was just as watery as Regent North. The temperature was 5 celsius, but it was cloudy and there is no reason for the ice to melt at such a temperature in December. None of the other rinks that we visited at the same time had water on top.

We stopped in ay the rink to check the ice and find out why the rink was listed as closed on Dec.7. The ice looked fine today despite sunshine and a mild day. There was no one skating. The rink guard said he could remember no times when the rink was closed in the past few days. 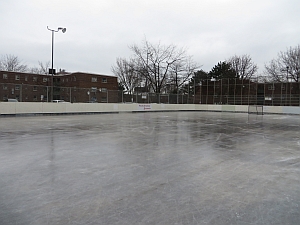 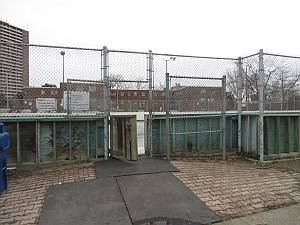 In the morning, the city's website once again listed the rink as closed, even though the temperature went down to minus 7 last night. In the afternoon, it changed back to open. Weak compressors?

The rink was open, and there was good ice for most of it, but cones had to be set up at a couple of spots in the middle. A very friendly rink guard was happy to answer questions. He said that the rink had been reopened on Tuesday Dec.2, but nobody came to skate because they didn't realize the rink was open. However, the zamboni came more often than usual, putting on a lot of water to build the ice. 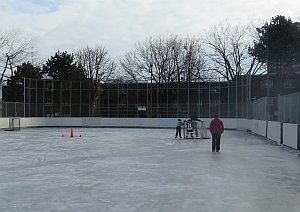 cones in the centre 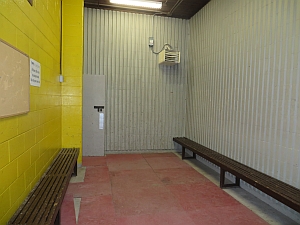 office: clean, but like a big windowless broom closet

This rink was listed a closed again in the afternoon -- presumably warm weather and still-thin ice.

The city's rink website listed this rink as having reopened.

At 7.30 p.m. the rink is down to concrete in many spots. The compressors are on, the temperature is 1 celius, and the ice could be rebuilt quickly -- but there is nobody flooding. Why?

Regent North Rink has ice, to take the place of Regent South, which is under construction. The rink is tucked in behind low-rise apartments on Dundas Street just west of River Street. Legend has it that the two Regent rinks were built close together but one north of Dundas, one down on Shuter, because there used to be a gang boundary that made it unsafe for the skaters to meet. And in fact Regent North looks a bit forbidding -- bordered by big wheeled garbage bins on the north, "thou shalt not" signs on the side of the rink house. 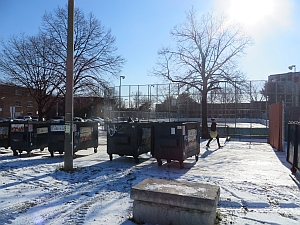 view of the rink through the trash bins 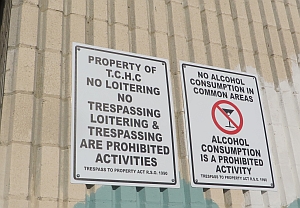 The rink house is completely windowless, presumably for the security of the building (but leading to the insecurity of the rink user and the staff). But there are new, solid mats leading from the changeroom to the rink, and there are "fresh paint" signs on the doors. The hockey boards are not bristling with company logos like those at the better-heeled rinks, but there are a few. 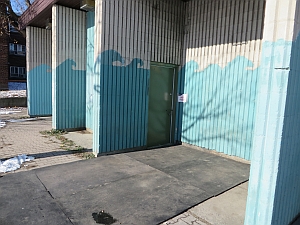 rink house is a windowless fortress 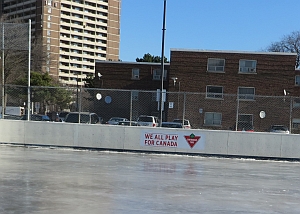 6:05 pm: It's raining, but three teenagers arrived with sticks, one with skates & the other two in shoes. There were a couple of pieces of wood that had been blown/thrown onto the rink. I managed to kick & pry one loose and move it off the rink, but the bigger one was frozen too far into the ice surface. All doors in the vicinity were locked. 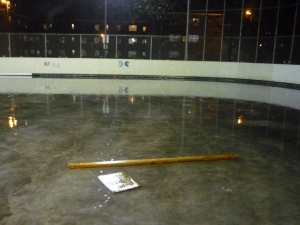 wood pieces frozen into the ice 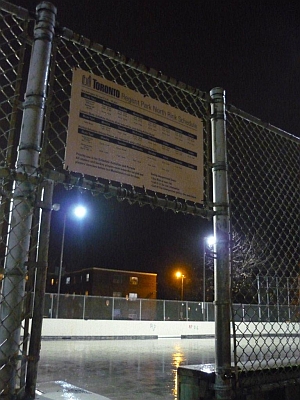 At 1:25 pm an adult shinny player was just leaving the rink. A boy of about 11 was skating. He said that he was glad the rink was open, and that he hoped other skaters arrive so he could play some shinny.

This rink was meant to open last Saturday, but the building attendant says that flooding had hardly begun by then, the rink was still mostly cement. However, water was put down over the weekend and the rink opened on Monday. It still looked very thin, and no one was skating on it.

This is one of the most unattractive rink buildings in the city, which is saying something. It has no windows and feels unsafe to me. But the very friendly rink attendant says he feels fine sitting there all by himself, in a place where no one can see or hear him. Anyway, this rink is scheduled to be demolished next year or the year after, as the rebuilding of Regent Park moves into this section. 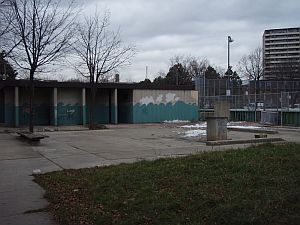 Rink seems as though your about to skate on cement/a grass field that froze over (not a smooth or thick surface in any which way). Needs to be flooded at least 2 more times to be able to do any skating. Please help us out over here because I know some people that want to be playing hockey everyday around here.

The ice was in and there was a building attendant and a rink guard inside. The rink change area has no windows, so the staff can't see out and skaters can't see in -- creepy. Out at the rink there were zero skaters. The sign announcing the opening of the rink was from last year, and gave December 8 as the date. It looks like nobody knew. 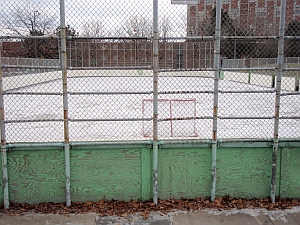 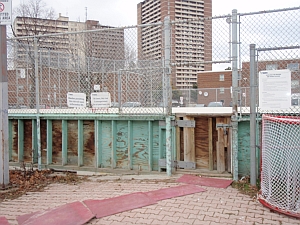 ice in, but rink looks neglected, and nobody came
w

North Regent is a rink on its last legs, as far as we know, its planned destruction is forecast within the overall Regent Park revitalization. Since it is going to be destroyed (and not rebuilt) the rink's structural difficulties have long been ignored since it will be gone soon. The usual problems with Regent North are: terrible changeroom, the worst in the city, tiny and cramped with no windows whatsoever, one must walk through the washroom to enter. The phone in the staff part of the room never seems to work. The ice itself is often not great because of both inattention but also because the compressors must not be strong enough and on high sun days the sun destroys the ice.

The wonderful thing about this sad story is that South Regent, only a block away is gorgeous, large, well attended, lots of windows onto the rink and windows in the opposite direction getting the afternoon sun. But, back to Regent North: tonight the weather below zero and with no real sun the ice is great! However it looks like the concrete pad was not properly cleaned before the ice went in leaving dark patches where piles of leaves submerged in the ice, weakening the ice.

North Regent is not staffed at this time of day so the building is locked but the rink door is open and a sign reads "unsupervised at times use at own risk." While no one is taking advantage of the offer I am glad that one could. The ice is great, the lights are on. A rink to yourself, what a treat!

The ice here is the worst and at first it seems that no staff is there and that no one has opened the rink yet. The ice is very, very thin and wet on top although it is so thin that it should be rock hard. A lady walking her dog nearby complains that they haven't opened it yet this year and that kids are waiting. The rink is locked up and so is the change room. The schedule is not posted outside. There are benches outside in the little alcoves of the changeroom, but between two walls it smells like pee. Eventually a staff person appears and explains that the rink is open for the season but closed today. The rink is maintained usually twice a day at 3pm and in the morning. The ice has been cleaned today but it is in such bad shape...strange. The refrigeration equipment must be very bad.

There are mats outside but there is no staff phone and the bathrooms are dirty and there is no TP in them. There are no indoor garbages and the staff have not set up their desk yet, nothing is posted or unpacked. The changeroom is always hard to get into since there are hockey nets in the way which one must squeeze by to get in an change. There is no separate staff area, unlike most rink changerooms.

There is no food. There is no signage and no code of conduct and no schedule on site. Outside the doors to the changeroom are unlabelled. There are extra mats lying around. There is no pay phone. They have green shovels but the staff says its best to just close when it snows.

The shinny scene is normally good after school (the staff says), but not today: its closed. Parking on Gerrard or Dundas. This rink and changeroom is on its way out, sometime in the next 10 years as regent park gets redeveloped. So there seems little incentive to follow up on maintenance, at least looking at the ice today.

Sunny, 8 degrees 4.00. Looks wet, but door is open. Theres a family just playing on the ice without skates, baby being pulled on a sled.

Views of the Rink

For the skating schedule, go to Regent North, then click on Skating.