At 11 a.m. The rink is obviously still closed for repair, everything locked, compressors not on. No workers in sight. The pipes look all new, and their replacement was probably overdue (this rink has suffered from mechanical problems over the years), but the construction schedule was perhaps not fitted to the rink season. A zamboni driver at another rink said that the header trench has been open, with the concrete slabs stacked beside it, for about three weeks. 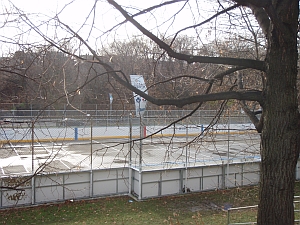 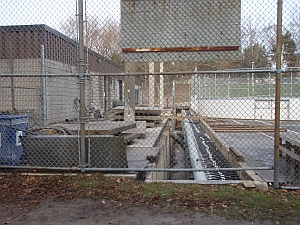 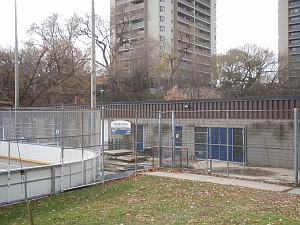 no condenser steam coming from the rink house 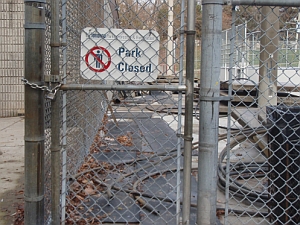 The city's website projects a Dec.5 opening (tomorrow!) but that's hard to believe.

The city's website has changed the projected opening to Dec.9. More realistic, given that the work looked unfinished over the weekend and the compressors aren't even on.

The city's website has moved the projected opening to Dec.10.

only in the last 24 hours has there been an effort to make ice at Ramsden. Yesterday, or earlier, a pipe apparently burst on the compressor and the unit was shut down. The pipe is being repaired today.

According to workers there, flooding should start tonight and the rink open "by Friday or Saturday." I would be sceptical. My guess is that Sunday is a more likely safe opening. But, check later in the week. Not that many seasons ago, the rink opened with an inadequate ice build-up. I and others went through the ice to the concrete and nearly ruined our blades.

I met with City of Toronto staff about three weeks ago and tried to get commitments to improve service on Christmas Day, Boxing Day and New Year's Day, traditionally days of heavy interest and use. Unfortunately, in the last couple of years, the buildings have been closed (no washrooms for parents with kids or anyone else for that matter) and the ice unserviced.

I am pleased to report to you that Ramsden will be open this weekend. I remain sceptical but I was just called by a parks employee who knows rink operations, knows Ramsden and knows ice conditions (he is in charge of several rinks) and he says Ramsden will be open Saturday morning. In response to my questions, he said that we will not go through the ice to concrete. Touch wood. And be careful. After all, it is still mild and by afternoon, the ice will be soft. His boss emailed me a message of confirmation that Ramsden will open tomorrow. 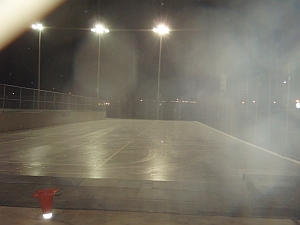 6.15 pm: The rink has a layer of ice on it, looks solid although one can still clearly see the tennis lines through the ice. The zamboni driver was just about to give it another flood. He said he'll be working continuously until late into the night, and he was confident they would open on time in the morning. Seems like he knows what he's talking about.

Ramsden Rink finally opened for the season, yesterday. At 3.30 pm today the rink had a dozen shinny players (half wearing helmets, the other half not) and a few pleasure skaters. The ice looks good, and it also looks as if it had heavier use earlier. The recreation coordinator for the rink in the area was there too. Both of the staff looked very pleased that the rink was finally open. 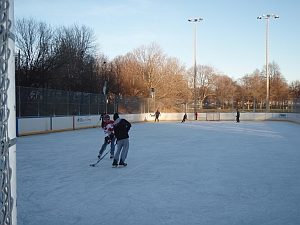 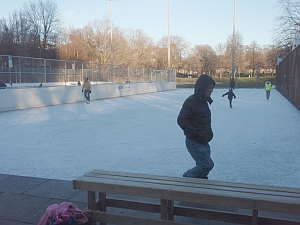 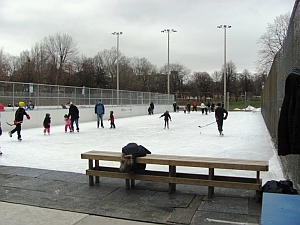 From rink user Rafael Lewis: "Here's a picture from Ramsden Rink taken today. It had quite a few little ones with their parents' skating about."

It appears that there was some mix-up here -- shinny hockey is meant for the other pad.

Ramsden Rink is also going to be open on Christmas Day, great news. After rink advocate Gar Mahood sent out an e-mail to 97 Ramsden Rink friends saying he hoped the rink house could be accessible on holidays, Dufferin Rink got word that a donor was willing to pay for staff wages for all three Ward 18 rinks. The City said they'd accept that donation.

A Ramsden neighbour who takes his family skating there offered to donate the $179.36 it would cost to open Ramsden for 8 hours on Christmas too. He doesn't yet know if his donation is accepted, but Ramsden Rink is now marked "open" on Christmas Day. on the city's website.

Update later in the day, from Recreation manager Sue Bartleman: We had already met with Gar earlier and we are covering the staffing costs.

So the City had already intended to open Ramsden on Christmas Day, no donation needed. It certainly seems fair, since the rink opened a week late and so the staffing costs were lower than what was allocated.

E-mail to cityrinks from shinny player Marty Blake: As an avid shinny player and skater in Toronto, I've always been frustrated trying to contact the city and its rinks to get info on when rinks will be open, especially during christmas holidays. You can almost never speak to a real person, and so often there are alternate or old versions of schedules posted online, and times change over the holidays without being communicated. Its great that your site has dated updates so we know the info is relevant!

Keep up the good work!

And special props to Gar Mahood, my shinny buddy at Ramsden Park, (and easily the most ardent citizen/shinny fan/pain-in-ass-of-the-city) for lobbying to get the rink open on christmas day, and communicating that. Great work Garfield!

I will be there on christmas day, now that i know its open! And I will bring a treat for the city's maintenance guy who has to work on christmas day (hopefully at double time and a half! I don't mind my taxes going towards this!! 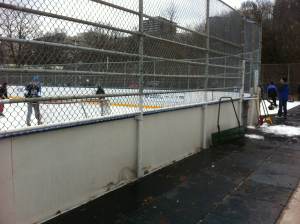 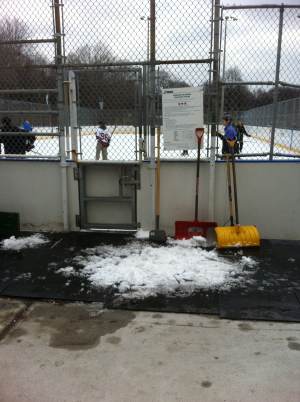 no zamboni, but shovels will do

12.45 pm: 6 skaters on the shinny hockey pad, 12 on the pleasure-skating pad. The ice is a bit rough but there are snow shovels beside the rink, and a little bit of snow where some skaters must have cleaned it. There are lots of signs up and the building is open (but the rink visitor could see no sign of any staff).

The two schedules taped up in the rink don't agree. One says the rink change house will be closed on Boxing Day and New Year's Day, the other one says it will be open. The city's website schedule says the building will be open. 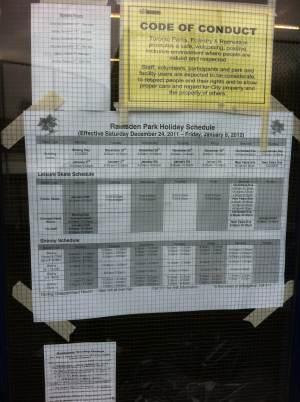 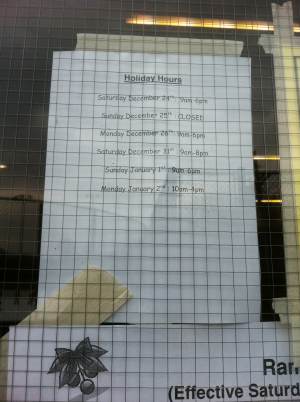 different than the one beside it

I have just noticed the "new" 2012 Ramsden Park adult shinny schedule on your website.

There is a big gaping void/blank space on Wednesday nights, where we used to have adult shinny from 730-10pm.

Has this changed for the new year (ie did they grant a new private permit for this time?), or is this simply a typo or clerical omission?

Please tell me we haven't lost wednesday nights - it is usually the most popular night of the week for shinny at Ramsden!

You can ignore my last message. I went by Ramsden Park last night, and spoke to the operator, and viewed THEIR schedule:

Ramsden is in fact open for adult shinny on Wednesday from 730-10. The schedule posted on the City website (and yours, which I think is just linked from theirs) is inaccurate. Probably a typo or simple omission

Sorry for the consternation