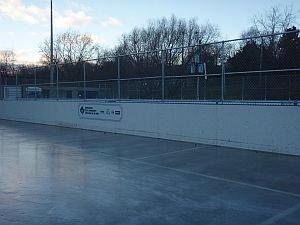 This is one of the rinks that's not open, and it's easy to see why -- the ice is very thin in places. There's a staff guy filling the zamboni. The rink is listed to open on Sunday, but they'll have to get busy.

From rink user P.P. I've been trying to phone Ramsden Park Rink for days to inquire about their schedule but no one picks up the phone. I dialed 392 0918. Can you help me?

Response from cityrinks.ca: the number we have is 416-392-6826, listed on this page: http://cityrinks.ca/wiki/wiki.php?n=RamsdenRink.FrontPage, and it's the same that's listed on the city's web page. Try it -- I bet it will work. (Please let us know if it doesn't.)

From rink user P.P. It does not go through to Ramsden Park rink. It goes to Brown. I was told they don't have a land line at Ramsden. In case of emergency, or to check on ice conditions, or schedule changes this is a vital service.

Please pass this on and lets do something about it.

There was a phone there for years. I could call and find out if rain had washed away ice, or if snow wasn't cleared, or to confirm schedule. I can't tell you you the number of times I got my kids ready droive over, only to have wasted my time. Many people share this complaint. 311, which I have dialed, has a person on the end of the line that doesn't even know where the rink is. How can they provide info?

The phone must be restored. Especially in the case of an emergency.

Thank you for your note regarding the lack of a land line at Ramsden Park. We discovered this weekend that the land line is not functioning properly and have placed a repair request with Bell telephone. The staff have been issued a mobile phone to use for emergencies, and we checked on Tuesday to ensure that it is operating. We agree that a phone is essential for emergency purposes, and hope that we have your confidence through the use of the mobile telephone.

Regarding the scheduled programs at Ramsden Rink, I have noted the link to the Skating website. You should be able to find the regular programming featured on this site. http://www.toronto.ca/parks/prd/skating/dropin/leisure/index.htm 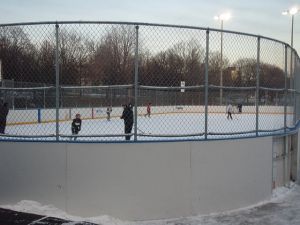 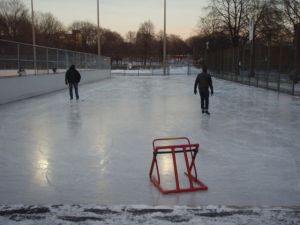 Notes from CELOS rink visitor, taken at 4:30pm: Ramsden rink was open and there were approx. 5-8 hockey players and three people on the pleasure pad, one of whom had a hockey stick. Though the rink was scheduled to host kids aged 13 years and under, the players were obviously mixed ages including teenagers over 13. There were two outside benches, only one of which had mats leading to it. There were only a couple of players with helmets. There were no rink staff outside but there was a staff person inside the building. When I asked him skating times and how to phone, he replied that the phone line was down and that he wasn't sure if they would get a new line or not. He told me to call 311 and gave me the general brochure for all of the rink schedules. He also pointed a poster with the rink hotline 338-RINK and told me I could look online at toronto.ca/torontofun. The changeroom was empty but had floor to floor mats and one pop vending machine that appeared to be working. 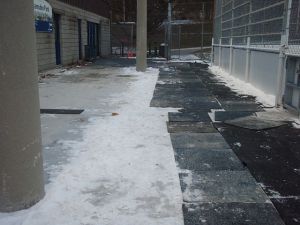 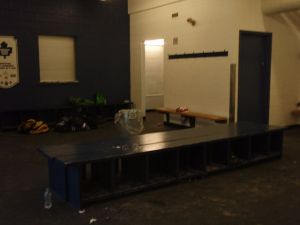 Rain off an on most of the day. At 8.40pm there were 2 staff in the staff room (one was asleep!) There were 4 skaters. The ice was dry except for a thin wet line in the center of the pleasure rink.

Both rinks were full of festive skaters pleasure skating and playing hockey. Many more were putting on their skates or warming up in the rink house. A young rink guard went to find toilet paper for the women's washroom, but said that the supplies must be locked up in the zamboni driver's office. He checked to see if there was extra in the men's washroom but one of the stalls had no toilet paper.

The Toronto Maple Leafs have a prominent ad in the rink house and two endorsements on the side of the shinny rink. One woman talked about how the Maple Leafs "redo" a rink each season. She said that they had done her rink in Riverdale, and had spent $ 150,000 to fix up the Trinity rink. She feels like they do good work. 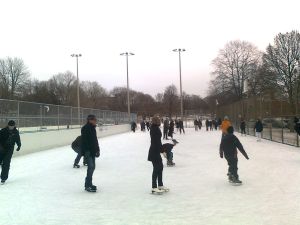 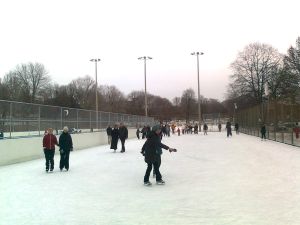 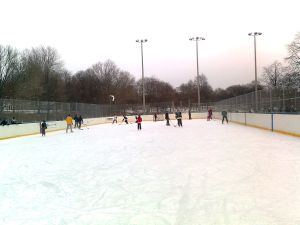 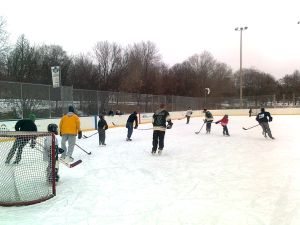 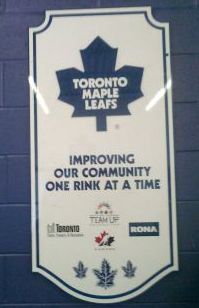 I just received this email (below) and am very disappointed. Last year we had the issue where staff at Ramsden were not supportive of the women-only time slots on Tuesdays and you were very supportive of making change there. I thought we were done. Apparently not.

Obviously the attitude shift needs to come from the frontline - the staff. It is one thing to send out protocols and another to have them manifest. Once again this is a frontline staff issue. They must enforce the PFR program times.

I cannot be there on Thursday as I teach a class but I know other women will be there.

Please let me know who you will send to ensure that the rink staff follow PFR protocols and rules.

This seems to be a difficult year for the women to have their playing time but I know you will support us in every way.

On Thursday night I went to Ramsden Park ice rink to play a little hockey (Thursday 9 - 10 p.m. is reserved for women's shinny) and was disturbed to see there were about 30 men, most of them very fast, who took over the ice as soon as the Zamboni was finished. The rink guard's response was simply, "Well, there weren't enough women here so I had to turn it over to the guys." This is a very disappointing attitude, not to mention a self-fulfilling one (ie. any women who did show up would very likely go home).

Rather than phone my city councilor, I thought I would take direct action. Who is willing to join me at Ramsden next Thursday at 8:45 p.m. It's on Yonge across from the Rosedale subway stop. We need a good sized crowd, I think, to reclaim this ice time, one of only two hours per week that are dedicated to women's shinny at Ramsden.

I'm sending this to my hockey friends and also my non-hockey friends. I don't care whether you're any good - if you can stand up on your skates and have access to a stick and helmet, please consider joining us. And forward this to any skating women you know. This is important and it might also be a hell of a lot of fun.

I'm sorry to hear there was a problem at Ramsden last Thursday night. I was at the rink last Tuesday night and introduced myself to several of the shinny women. They informed me that there had been no problems this year and that rink staff have been great at making sure men did not take their ice time. I was very surprised to hear about what happened on Thursday.

We do not have a Rink Guard on duty Thursday nights, as we have been unable to fill that shift; however, I will ensure that my rink co-ordinator visits Ramsden at 8:45pm every Thursday to ensure there are no problems.

I will be at Ramsden this Thursday night.

At 8.50 the zamboni driver appeared to be warning the large number of shinny hockey players that they would have to leave if one or more women came for the women's shinny time. One skater in the change room was very vocal about the ridiculous unfairness of allowing women to have their own shinny time, when they could play alongside the men without restriction.

Nine women came, and the men changed into shoes and left. Recreation supervisor Kelly McInnes was there and spoke to the women, and gave them her card in case there was more trouble.

The atmosphere in the change room was unpleasant, not an encouragement to return. 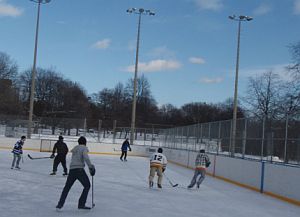 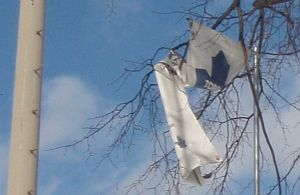 Kevin Beaulieu, executive assistant to Councillor Kristyn Wong-Tam, took me up on my offer to tour him around the five rinks in their ward. Ramsden was the last stop. Kevin pointed out the Maple Leafs banners that had been twisted around by the winter winds. It was a very cold day, but the rink was lively with school kids, and youth playing shinny hockey, without helmets (the way most people prefer to play pond hockey).

open window to the staff room

Inside the rink clubhouse I was surprised to see the metal curtain of the hatch open -- something I had not seen since shortly after the renovation. The building attendant was very friendly, and straightened me out on my misconception. I had heard that the hatch could not be opened because the key had been lost. The rink staff told us, yes, the key was lost soon after the building reopened, but it was lost with the lock to the hatch in the open position. This staff person said he preferred to keep the hatch open, because he could see the rink users that way, and it made him feel more a part of the scene. Brilliant idea!

The rink operator brought out this letter, to show how successful this season had been:

Dear Mayor Ford, It is with pleasure that I write on behalf of Friends of Ramsden at the close of the skating season to commend the work of two parks employees who maintain the ice surfaces at the Ramsden Park artificial ice pads. The work of Jim Wilson and Rob Guy has been outstanding.

Many users of these two ice pads, hockey players and skaters, have been using these facilities for years. And, over the years, a handful of the employees of the Parks Department have excelled. But, in the last two years especially, the quality of the ice surfaces and maintenance has vastly improved thanks to these two men. In fact, it has been excellent. And it has been noticed.

But the enjoyment of the rinks by users may be attributed to more than ice quality. The two employees in question actually interact with us, consult with us in the process, take pride in and satisfaction from their work and put a very favourable face on City of Toronto service delivery.

Please ensure that our compliments and appreciation are expressed to Mr. Wilson and Mr.Guy and to their supervisors.

Sincerely, Garfield Mahood, OC On behalf of Friends of Ramsden