noon The rink was closed when we went by. This tennis court rink can be completely locked up. The staff in the building said that the flying crew were on their way over and that the rink needed only another 2 floods. The ice looked pretty good, at least an inch thick in the middle. There was alot of debris, however, frozen in the ice, and the edges did look thin. You could see bumps along the compressor pipe line all across the rink. The rink building was closed but the staff looking after it allowed us to step inside for a minute. The staff said the building couldn't be open to the public because of vandalism concerns, even while he was scheduled to be there. We didn't to check to see if the washrooms were at least open.

A staff person has been assigned to this building to keep the change rooms open and look after the washrooms between 7 am and 3 pm -- in other words, during those hours when the rink gets the least use. The staff person sits in a windowless staff room without a sign on it. The rest of the time the change room is locked, but the washrooms -- finally this year -- are unlocked until 9 pm.

wreath from the local business association 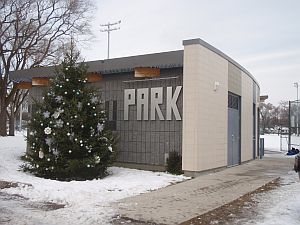 this $1.54 million building is mostly locked in winter 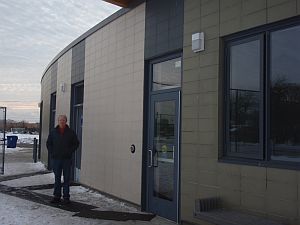 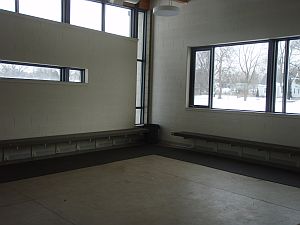 change room, with only two benches but good rubber mats

only one light during the dark season 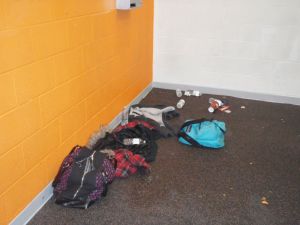 skaters keep their bags in the washrooms

At 8.30 pm the rink had 18 skaters, plus 7 more people on the sidelines. The washroom had quite a few bags in it, since the change room is locked and skaters don't want to keep their back packs outside in the snowbanks. There seemed to be two shinny games going on, as well as a bit of pleasure-skating around the edges -- in the dark! There is only one small street light beside this rink, even though in much of the rink season it's starts getting dark in late afternoon.

When asked about playing shinny in the dark, some young skaters looked puzzled -- they thought that's how all the rinks are run.