No opening signage, but the schedule is up which is weird because the rink looks like a crime scene! The lower fences are missing most of the way round and there's yellow 'CAUTION' tape up. There's no ice, just concrete and puddles. The fancy new-looking change room building is locked up and there were no staff on site. 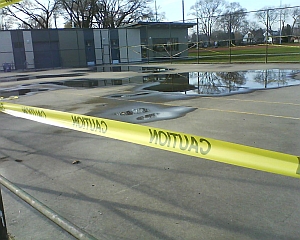 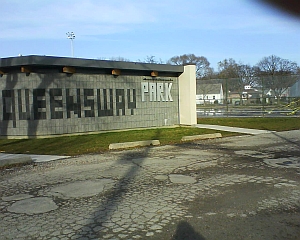 The city's website has a note that the rink building is closed. On a sunny Saturday morning at the end of the Christmas holidays, the ice is very scuffed up and snowy (not from precipitation). The signs are there, that this rink is well-used, at least in the later hours of the day. There is only one small bench for sitting and changing skates. The brand new designer building is locked with a sign saying that the locked doors are because of vandalism. Its real cause is poor city stewardship -- expensive rink plant, expensive building, and no programs. A pity. 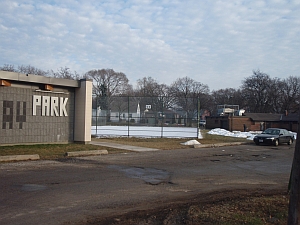 new building on left, old one on right 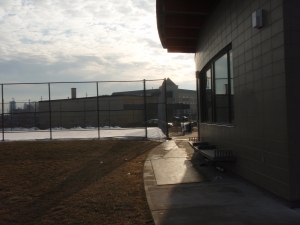 mats from outside bench to rink 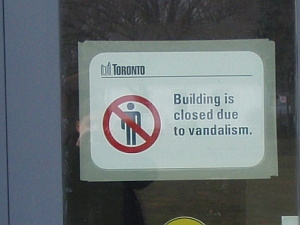 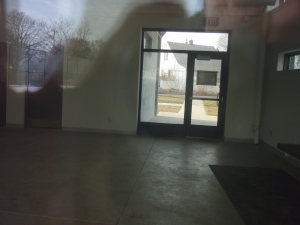 interior view through the window 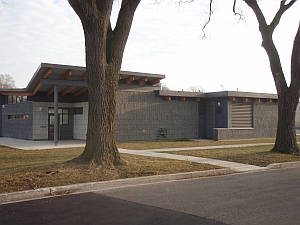 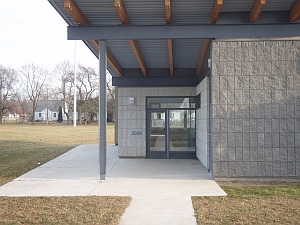 Dear Councillor Milczyn, This week's newspapers praised you for you architectural knowledge, and the new Queensway Park building in your ward is certainly a very modern design. But what is the use of such a nice building if it stays locked all winter?

Here is our cityrinks.ca web page on Queensway Rink: We have also featured the building as a sad case on the cityrinks.ca home page.

If a recreation staff could be stationed there even for part of the day or on the weekend (as in other parts of the city), the doors could be unlocked and the neighbourhood could get the benefit of their taxes. Part-time rec staff wages start at $10.25 -- this would not break the bank. Or perhaps there would be a willing donor for that amount in the neighbourhood?

For background, the capital improvement plan for this rink is being done in phases. The phase one that was completed does include two new washroom facilities. There is also a community room, which Councillor Milczyn has advised that it is intended to be closed/locked unless has actually been permitted out to the community. I am getting additional information on the permitting process for this room for you and can get back to you on this. The pictures that you are showing on your website are of this room which is a room that can be used by permit.

The next phase is in the capital plan and is currently planned to be completed in 2015-2010. The timing of this will depend on a number of factors but the Councillor is working with Staff to ensure this is not delayed. He is monitoring it within future capital budgets.

As you may know, the rink at Queensway park is historically an unsupervised rink. It is advertised as such and at this point I would assume that most residents in the area are fully aware of this.

Regarding the washroom: The washrooms at this park building were opened again this year for the winter rink season as scheduled and the washrooms were left UNLOCKED. Unfortunately, on January 4th the Mens washroom was Vandalized but did remain open while repairs were scheduled. On January 5th the Vandals again went into the Mens washroom and further destroyed all of the lighting in the Men's & Women's washroom as well. At the same time they damaged to the washroom stalls in the Women's room.

For this reason Parks Staff were forced to close and lock both washrooms until they can again be fixed and re opened. We are sorry for the inconvenience and wish that vandals didn't do this to our public property, and wish that these washrooms could remain open but with this occurring, is necessary to close and lock them. I hope that this explains to you and those reading your website why regrettably the washrooms are locked at the present time. This is an extremely upsetting situation and Councillor Milczyn wishes that this type of destruction did not occur to our public spaces.

It's a heartbreaker, isn't it, when somebody damages public facilities, apparently just for fun?

Hopefully the replacement light fixtures will be made harder to break. I'm guessing that there must be lots of unstaffed public washrooms in Etobicoke parks, shopping centres, etc., so that tougher light fixtures etc are available.

I'm aware that Etobicoke runs 8 neighbourhood compressor-cooled skating rinks that at some point (2001?) became unsupervised, presumably in order to save money. There are no unsupervised rinks elsewhere in the city. Not having an indoor space for warming up or changing, and no access to public washrooms, means that rink use tends to be very local. That has its strengths and weaknesses -- local is nice for the people in the nearby houses, but the energy costs for compressor-cooled rinks make very restricted usage harder to justify, fiscally.

Re your invitation to meet with the councillor to discuss Ward 5 outdoor rinks or the Bubble -- we'd like that. Our project is "making maximum use of what we have." That means having a $300,000 (? my guess) building open for a lot more year-round community use than may be the case at Queensway Park. We've been experimenting in west Toronto, and we're getting the costs down -- want to suggest a time for a couple of us to come by and talk about this? We can do it during the lockout time, if you like, since time is short now.

The community building located in the Queensway Park was build by one of the condo developers at the request of the City.

It hasn't been furnished but, far as we understand, can be used for community events.

We have used it last winter for one of our events.

The cost of the field house, we were told, was $1.54 million. We learned from project coordinator Doug Giles that the building was completed in the fall of 2010. The councillor told us that up to this day, no use has been made of it. There was no money left over for furniture, for one thing, so the skate changing/meeting room area is mostly empty, with only two wall-mounted benches. Perhaps because there are so few benches, the field house was never entered into the permit system. After more than a year of locked doors, skaters have no access to change their skates, and its not possible to get a permit either.

I've been writing a bi-monthly series about a number of parks and rinks. Here is what I wrote about Queensway Rink (and comparing it to Campbell Rink): //publiccommons.ca/documents/record/1003

Please let me know if I got any of the details wrong.

If you ever wish to move in the direction of public programming for this publicly-funded resource, we'd be happy to join the conversation. Also, the part-time rec staff that work their magic in Ward 18 are very resourceful in helping other programs.

Thanks for taking the time to meet.