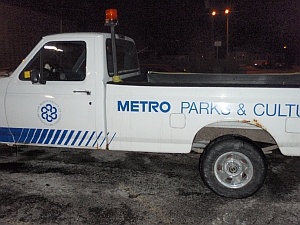 At 8.15 pm the rink was shiny from just being flooded. A rink maintenance guy sat in his truck nearby. He said he had just done a flood and that he'd be doing one more before his shift ended. He said Queensway hadn't opened yet for the season but would open the next day. he thought there might have been a compressor problem that delayed the rink opening,. He also said they have equipment breakdown a lot -- we're still using equipment from the sixties. His truck looked more recent, but it had the Etobicoke pre-amalgamation logo "Parks and Culture" on it.

The rink has only one weak streetlight to see by, no proper rink lights, for night-time skating. Maybe that's because it's very near houses.

Despite the rain and snow yesterday, Queensway Rink was in good shape today and the guys playing shinny there said the ice was fine.