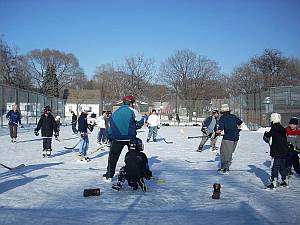 3:30pm Twenty hockey players of all ages ranging from adults to little boys are playing an energetic game of shinny. Some of the players are wearing helmets. Some aren't. Three more boys are playing on their own at the east end of the rink next to the boardwalk where people put on their skates. The ice is snowy but otherwise in good shape except for the edges where it's soft.

12:30-1:15pm The weather is warm and the snow in the park is starting to melt. The ice, however, is in pretty good shape. When the CELOS researcher starts skating, he notices that the ice is a little soft especially along the edges where some melting is noticeable. Nonetheless the ice is more than good enough for pleasure skating and hockey. Fourteen people are playing a game of shinny. The players are of various ages ranging from young boys to adults. Two of the players are teenage girls. Both girls are good players and can easily keep up with the boys. Of the fourteen players only one little boy is wearing a helmet.

The shinny game dominates the ice, but there are other skaters. In one corner near the entrance, a father and is young son are passing a puck back and forth. The little boy looks to be four or five years old. Another teenager is shooting the puck by himself. Three young teenagers are pleasure skating. They skate around the edge of the rink, but sometimes have to stop because of the hockey players. There are also a few moms without skates standing on the wooden boardwalk where people put on their skates. 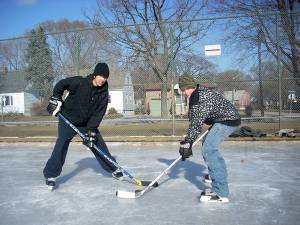 These boys weren't at school because of exams
Click on picture to enlarge it. 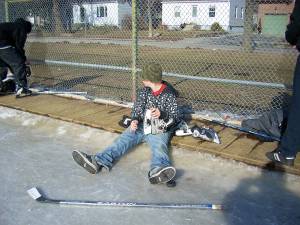 The changerooms are permanently locked.
Click on picture to enlarge it.

Click here to see photos of the rinkhouse that were taken during this visit.

1:45-2:15pm There are two teenage boys at the rink goofing around. They are sitting on benches in the middle of the ice. A city truck comes and two workers take away the benches. The boys are disappointed. They were hoping the workers were coming to fix the bumpy ice.

The workers say the benches have to be removed because people leave them on the ice where they make holes. One of the workers shows me a spot where there were holes that had to be repaired. The workers point out that the benches belong to the school not to the City. They say that if there are going to be benches at the rink they have to be chained to keep people from bringing them onto the ice.

Asked if the changerooms have ever been opened, one of the workers says they used to be open a long time ago but not in recent years. He says the City will be tearing down the rinkhouse and putting up a new one.

The two boys say the rink is cleaned once a day each morning. The workers confirm this. When the boys complain to them about the poor ice quality, one of the workers says the ice was flooded earlier today. When the boys point out how bumpy parts of the ice are, the worker shrugs his shoulders and says "What do you expect? It's an outdoor rink."

The boys talk about an outdoor rink at a place called White Oaks. It turns out White Oaks is a natural-ice rink flooded by volunteers. When the CELOS researcher explains the difference between compressor-cooled and natural ice, the boys are surprised. "You mean there are pipes under here making the ice?" asks one of them. He adds these pipes can't be very good because the ice is so bad. Both boys are quite insistent on this point.

During our conversation two older boys show up to play hockey. Asked what they think of the ice, they say "it's garbage."

The two younger boys are eager to offer suggestions about how to improve the rink. Aside from better ice quality, they would like to have hockey boards around the rink. One of the boys says they can even be old boards, just so long as there's something there. The boys would also like to have nets. There is a very active shinny scene at the Queensway, but there are no hockey nets.

The boys say the rink gets too crowded on weekends. Last weekend there were thirty players on the ice. There were some pleasure skaters too but there wasn't enough room for them. The boys point to the empty park beside the rink and say the rink should be made bigger. One of the boys plays hockey downtown at Harry Gairey/Scadding. He likes the fact there are separate hockey and pleasure pads there. He says they need the same thing at the Queensway.

The City workers say the rink is never locked. It used to be, but boys would cut holes in the fence so the City decided to leave the gates unlocked. The boys say kids sometimes play until 3 in the morning. There's a single outdoor light by the clubhouse, but the boys say it's not enough. They say there should at least one more light at the other end of the rink.

10am The gates are locked. There is a very thin layer of ice on the rink surface. The tennis lines below are clearly visible. There are leaves stuck in the ice. Two men have come separately to see if the rink is open. One of the men points out a hole in the fence were boys sneak in during off-hours to play shinny. One man asks if there are any other rinks open where he can go skating. 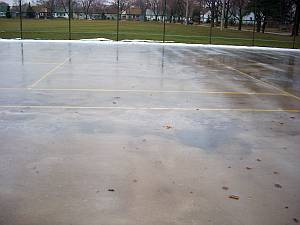 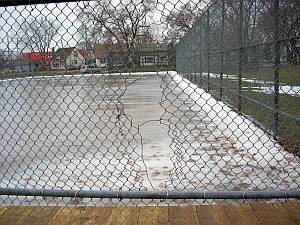 During off-hours players climb in through this hole 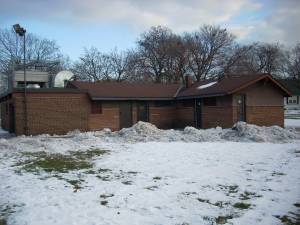 6pm There are 14 teenage boys playing a game of shinny. The rink is dark, but there is one outdoor light from the rinkhouse building that gives just enough light to let the players play. I speak to a few of the players including a boy I saw earlier in the day at Wedgewood. He recognizes me and is friendly. He and his friends say the ice is snowy (it is) and that the Zamboni doesn't come often enough. One boy says the ice is cleaned once a week, but another boy contradicts him, saying the ice is cleaned once a day. They tell me the rink is often packed with both shinny players and pleasure skaters. It is a shared-use rink which means the two groups use the ice at the same time. The players tell me people informally divide the ice between skaters and hockey players. The players will choose a corner where they can play away from the other skaters. Sometimes players divide up into teams and play a proper game. Other times it is just people shooting and passing pucks. I'm told the rink is quiet now because people still don't know it's open. Once word spreads that it's open, more people will show up. (This is something I've already heard more than once today at other rinks.)

9am The rink is in a park next to a residential street. The ice pad is large. It is surrounded by a chainlink fence. The sign put up by the City says this is an unsupervised rink. There are no boards. It is closed. The ice is flooded and there are blade marks, which means people have been skating here. There are some ruts and bubbles. The change rooms are locked. There's a man standing next to the chainlink fence surrounding the rink. He's a skater. He says the rink isn't too busy, but there are usually a fair amount of skaters. He adds that when it gets very cold, the rink is empty.