Peter, it was great to see that Dexter is beginning the entryway to the rink (gate in fence) -- however I am a bit alarmed -- it looks as though the cement access to the enclosure will be an incline -- this is exactly what's not wanted (and not in the building code, except with railings on both sides) -- please ask them to make a step and a level walkway in between.

Thanks for your email. I have checked with tech srevices and this project will within all applicable building codes.

We are following the existing grade and butting up against and level with the floor of the A.I.R. so as to eliminate the need for steps, and a need to retain soil etc. There is no reqiuirement for a hand rail due to the gentle slope. From our perspective this is the proper way to allow easy access to the A.I.R.

Please stop the work until discussion can happen. There is no "gentle slope" possible here because the issue was rink users slipping on ice. I have called the Councillor's office and hope we can get this straight (i.e. LEVEL). One stair is all that's needed and it's 100% safer than a "gentle slope."

Peter, I have as of yet had no response to the email below. As you know, I asked your crew to stop the work until there can be a meeting (the site meeting we have never had yet) to make a plan that involves level access to the new rink gate -- as requested for so many years.

After all we went through with the rink access issues last winter, I can hardly believe that the City would go ahead and put in another inclined concrete access (10 inches lower at the bottom than the top) -- I believe that was the measure made this morning).

Does this need a petition? How many names does it need, how many explanations to park users, to let them know that "level" was not in the City's plans?

I think it would make more sense to just have a site meeting with Dough Muir on Friday morning and make a plan for the two stairs needed. I'm guessing it will take 10 minutes.

Thanks for your email

Parks has been consulting on your original request to determine the best way to proceed. As we understand it you told City Staff to stop working this morning. Directing staff is not an authority that you have.

The Rink access issue was first raised with Parks earlier this year. Parks agreed to provide this access at that time. Parks is now working to provide the requested access. Part of our mandate is to provide accessible access wherever possible.

Parks has determined that the ramp does not require railings and provides suitable access at this point. This is also a more cost effective method in providing the requested access.

Parks will be meeting regarding the Composting toilet at Dufferin Grove 11 am Friday. I do not know if Doug Muir is available for a meeting Friday.

Something in writing comparing the pros/cons of slope vs steps might help, as discussed this morning.

In light of all the opposition to a ramp, of which would have had an 11% grade, we have rethought our plan and will provide the steps in spite of not being able to provide the required slope to them so that we will have enough space above the boulder. Having said this, there will still be enough slope to eliminate any ponding of water so that there will be no slip hazard during winter months.

I hope this eliminates the need for consultations etc. and I am proceeding with the pour on Wed. July 11 as I cannot keep rescheduling this work and creating a backlog of other projects. 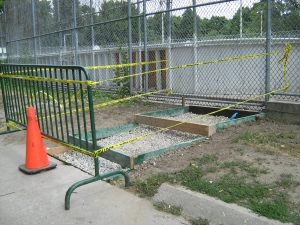 gravel base with two simple steps 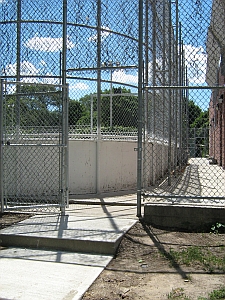 The level access was completed in a very short time last July, and now in a very icy and snowy winter, the steps are easy to clean and are used all the time -- with no danger of slipping and falling on an incline.