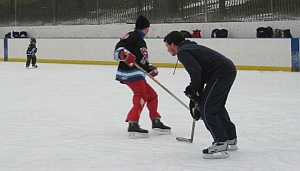 players boxes with bags on top in background

Could you let me know where the Wallace Players' box work order is at? You'll note that all the hockey players leave their stuff on the nailed-up boards, and most of the time there are resting players sitting up there too, with their legs dangling down -- players are complaining that they crash into the legs and it's dangerous. 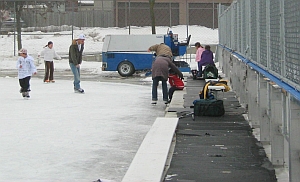 Also Mike Card said they'd bring back the white plastic bench top along the west ledge of the pleasure-skating rink, but as you see from the photo below, some of it is just bare concrete. Can you find out where Mike stored the remaining plastic bench-tops?