Message sent to Recreation supervisor Tino DeCastro by Mike Johnston from Planning and Development, June 13 2006, then passed along to Jutta Mason 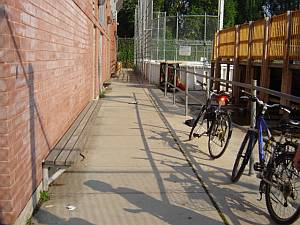 Tino, To facilitate the improvements at Dufferin Grove, we will require a staging area where the contractor can store equipment, material and the trench covers. The consultant has recommended 10m of the south pleasure skating rink be reserved for this function. The contractor will be erecting a temporary fence to define this area.

Can you make sure that when the skateboard area is set up that we maintain this 10m area.

The very expensive City skateboard park, recently water-damaged at Christie Rink and now repaired and half set up, is on the pleasure skating rink. The half-pipe is near the header trench and too huge to move. It would be a great shame if after all that work, the park would have to be dismantled in September already, to make room for the contractor's storage area. Is there any chance of doing the work in the six weeks of October-middle-of-November? Or alternatively, any chance of the contractor storing his stuff in the hockey rink? (which is easier to secure anyway.

At this point the work can not be delayed and is schedule from Sept 5 to the Sept 22. We will need to work around this schedule.

I will let you know if anything changes.

I have spoken to Rob, who is repairing and installing the skateboard park. He says that normally the skateboard park stays up on a rink surface until mid-fall. It takes him about 7 days to take it apart. So I guess he will have to start taking it apart again in the last week of August.

It's good to fix the header trench in time -- it's just regrettable that you weren't told about this two weeks earlier, so that Rob could have located the half-pipe further down the rink, leaving enough room for the construction equipment with a barrier in between.

I will work this out with David Hains when he gets back from vacation. I am sure there is another solution.

Tino, I'm glad to see that the header trench was investigated. Although Dufferin Rink is only 13 years old, the floor-sinking episode in 1998 ('99?) may have stressed some pipes or their joints, contributing to this early repair need.

Please ask Mike Johnston for a copy of this report. I would like to read who investigated this problem and what their findings were.

The decision to replace the header was made during a visual inspection. Our consultant and representatives from Technical Services were at the site and it was determined at that time that replacement of the header was warranted.

Tino, can I please get a copy of the consultant's report and also the cost of this work? When was it tendered and when was the decision about a contractor made? The documents I have from Accent Building Sciences don't mention the header trench, so my records are a little out of date.

My questions about the timing are to learn how there might be better coordination between facilities and programming the next time.

I think I met Mike (if thats whom you are referring to) when he was on site. When I asked however, he only said they were inspecting. Did not mention anything about the fact that it needed replacing. I think it would be good next time to get that line of communication opened. It concerns staff at Dufferin that programming here could be cut due to a lack of or delays in communication. Mike was seen last at Dufferin a good 2 months ago.

Since that header trench work means we have to take out the skateboard parks early, I'm glad Tino is looking into trying to work this out with Dave Haynes so that Rob can keep up the programming here.

Hi Kevin -- any thoughts on this one?

Jutta, this information is not available yet. I will keep you posted.

Please let me know today when this information will be available. I am not trying to stop anything -- I want the rink to be in good shape, and doing the work in good time before a crisis develops is a good principle.

But I still want to know this basic information. If Mike can't answer these questions I can put in a freedom of information request on Monday but I shouldn't have to.

Jutta, it is not that we do not want to show you the report. It is that the tender drawings and specifications are being finalized and the project will be issued as an RFQ through the purchasing department shortly. Therefore, I don't have the final documents at this time and pricing information can not be made available until after the tender process.

I hope this helps

The header trench dates we got from Tino were for an Oct.2 start-date, but the half-pipe was still set up on Oct.1

I have spoken to Mike Johnston. He has moved to another position however he indicated that this is now with purchasing. They are working on this but have not awarding the contract as of yet. The timelines would make this really tight to accomplish this year.

Good heavens. How do we find out what prompted the job in the first place? When I asked about it in the summer I got a little warning that if I questioned the need for this, the rink wouldn't be able to run at all this winter. Now you found out the contract hasn't even been awarded. Please find out what the whole story is. And it's kind of sad if we got Rob to take apart everyone's favourite half-pipe six weeks early for no reason.

I spoke Kevin Bowser again today about the header trench for the rink. Apparently John Abela and his team from Tech Services were out there today to test the pressure and based on that determine whether work is needed and to what extent. We'll know the results of that test in a day or two. If work is in fact needed their plan is to get in there asap so they can finish before the rink is scheduled to open. I'll keep you posted as I learn more.

Mayssan says she didn't see anyone from Tech Services, although she was at the rink pretty well the entire day. Could you find out if they did in fact do what they said they'd do, today? It would be good to have no more slack, since the rink opens in seven weeks.

Could you also find out why the work was originally scheduled in the first place? We need to know this, especially the rink staff who have to answer the public's questions. Also Tino needs to know it if indeed he is the direct person in charge of the facility, but I don't have the impression he's being told any more details than we are at the moment.

Can you please clarify the work you are doing on the header trench at Dufferin Grove, as per the questions below.

John Abela had his staff at the site this morning between 7:15am - 8:30am to pressure test the header. No leaks were detected, and further testing of the brine pump and piping system, also checked out fine.

The header is identified for more frequent inspection as a result of our building conservation audits and life-cycle planning.

At this time we are confident that the header is in good shape and the system will be fully operational.

In case no one mentioned this yet, in regards to the header trench work -- the east half of the rink surface (pleasure pad) needs to be accessible to the youth who use the two basketball hoops attached inside there. On this past weekend all of the hoops were in pretty well constant use. We can't have the number cut in half, since having four hoops is what's keeping the peace between the two groups who play basketball the most. (The Vietnamese kids use the inside ones.)

If a construction fence is put up across the middle of the rink, that would solve any conflicts.

Please let the staff (and also me) know if that's already been planned.