The rink looks wet with areas of cement. Several staff are standing beside the rink, looking concerned.

The rink looks even worse than two days ago. I meet an old-time compressor mechanic who offers several possible reasons: that the rink is too near the lake and has warmer groundwater underneath, or that the adjacent apartment building has dirty chimneys and the soot from there drifts down onto the rink, leaving a carbon dust that makes it hard to freeze ice. The one thing he is sure of is that the two days now spent in "staff training," prior to every rink season, were once spent cleaning the rink surface prior to making ice. He says that was a much better use of time. He also laments the fact that the City re-assigned its staff so that the experienced rink operators are no longer at the rinks, and the rink staff now don't really know what they're doing.

At any rate, the standard opening day sign taped on the door is clearly out of date. It says that the rink will open "weather permitting," but since the temperature is not warm and the sun is within two weeks of winter solstice, it seems that the weather in fact has little to do with this. 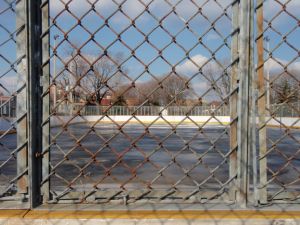 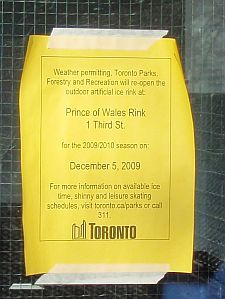 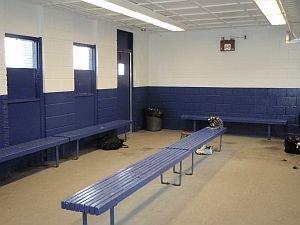 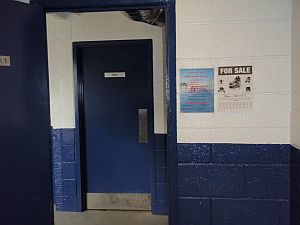 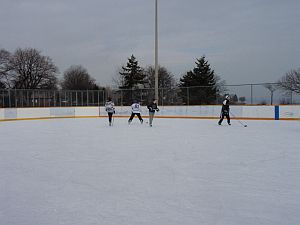 At 1.55 there were 7 shiny players on the rink, none of them wearing helmets. The change room was open, and I knocked on the door to ask the zamboni driver for permission to tape up the ombudsman poster. However, no one opened the door when I knocked, and I couldn't see him anywhere around the building either. I looked for a bulletin board, but there was none. So I just taped it beside a "skates for sale" poster in the change room.

The change room is painted in the usual Maple Leafs blue. The bottom half of the windows facing out to the rink are also painted over, presumably for the modesty of any hockey players who might be changing.