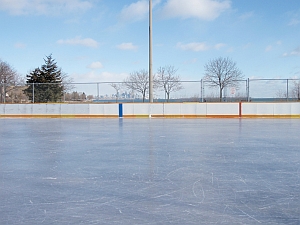 This is one of the most impressively located rinks in the city, with a huge view of the lake and the Toronto skyline. At 11 a.m. The ice was in excellent condition, but there were no skaters. The front door had no sign announcing the rink opening date. The rink operator was friendly and informative, though, and said they had been preparing the rinks for two weeks already. So it was no wonder that the ice was so much better than at the downtown rinks, some of which had only three days of preparation.

The rink operator said she hopes to get together a rink staff hockey team to play for fun this season. She said that that one of the rink guards at this rink was a former member of the Canadian Women's Hockey Team -- so the pace of the hockey ought to be pretty fast.

At 6.15 the ice had 12 young shinny hockey players playing a lively game, with a few other guys moving their own pucks around in the corners. The schedule says "public skate," but there were no pleasure skaters. 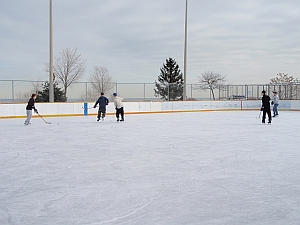 shinny with a view

At 1.30 pm there were some guys playing shinny on ice that was a bit skated up but not bad. The change room was open but there was no sign of any staff. Outside the front door there's a sign about hours but the sign may not be right, since there's no mention of permits or a program schedule. There's also a garage, for the ice resurfacer, and another tractor parked outside, with a snow blower attachment. 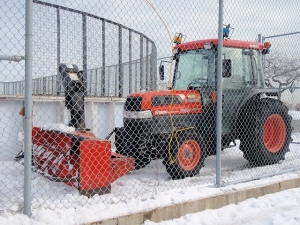 each "major" rink has its own tractor for snow removal 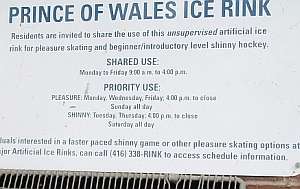