Bmx park up till October 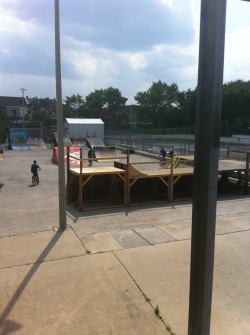 New electrical means we can have more things on the go without worrying about blowing a fuse - and we're getting a microwave. with a new industrial sized sink and handwashing sink.
Click on pictures to enlarge

The plumbers are in the middle of installing the sinks. Part of the floor has been removed and there are new pipes on the wall that separates the office/kitchen from the washroom
Click on pictures to enlarge

All the appliances are back in the room - nothing plugged in though. The sink is in too - looks like they're taking measurments to get going on the plumbing

Renovations started of the Staff Office in the Rink House.