Here are some comments about the newly rebuilt rink, from various skaters at the rink during the Open House. Everybody had an opinion!

Mario (Westmoreland Ave.): there have to be two railings for going in and out of the rink house. Right now people fall or they slide down the mats and crash into the doors.

Also: I like the new shape of the rink but I wish there was an island in the middle -- that way people wouldn't skate in so many different directions and get scrambled up. If you even put some benches in the middle, people would skate around them and stay in one direction.

Rick: I use lots of different rinks and I wish the ice maintenance would be better. Right now there's way too much snow on the hockey side. [After he is told that there are some shovels for taking the snow off the ice, if rink users will help staff] -- I always heard that rink users are not allowed to help shovel the snow off the ice, because of liability. For sure I know that they don't let people do it at High Park.

When I've seen that the hockey boards are in bad shape, nails sticking out, I don't tell the rink staff because they're just a bunch of kids and they're not going to take care of anything. 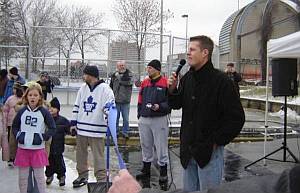 Wallace Rink was rebuilt in the fall of 2006, for $1.1 million, and it re-opened on January 6 2007. That called for a celebration, so the staff of Dufferin Rink collaborated with the staff of Wallace Rink to make it happen. There was a DJ on ice -- Dufferin Rink staff Ted Carlisle, and his friend Ben Rothberg. There was a campfire, and lots of free food -- roast-your-own hot dogs, marshmallows, a goose on a spit. The Dufferin Rink cooks also brought soup and made cookies in the men's card club kitchen above the rink.

Councillor Adam Giambrone cut the ceremonial ribbon, with ceremonial gold scissors. In his short speech he said "It's exciting to see the outcome of involving rink staff and members in the community on the design of the new rink. By listening to staff that work here everyday, we were able to improve the final product. Seeing everyone here today is exciting and hopefully people will keep coming back!"

See the Picture Gallery of the opening celebrations. 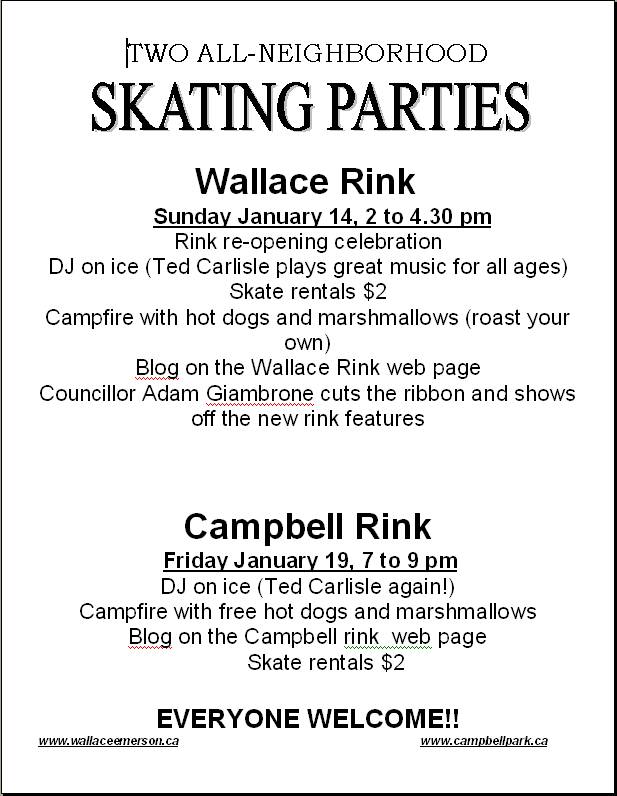 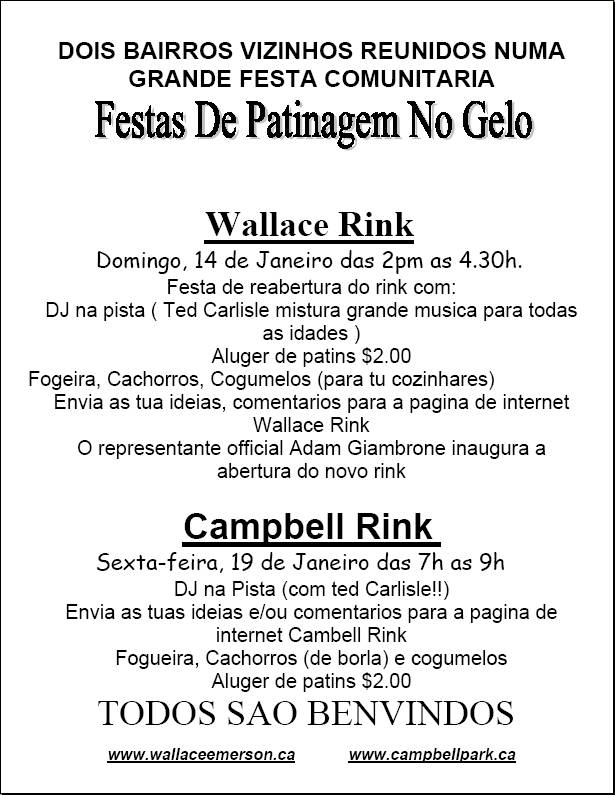