Yesterday I biked over to check out Otter around 2:00 pm. To my dismay there was only concrete on the two rinks. ( it was supposed to open for skating on the following day, this Saturday, Dec 5). Everything was locked up as usual. I then talked to three city workers who seemed to be working on the amonia tank system inside the plant.

I asked them if there was a problem at the end of the skating season last Feb./ March.

So, rinks need to prepare earlier than they do now, to open the rinks. Equipment should be checked much earlier and ice needs to be prepared better ( at Otter at least).

From D.M. to Andy Korepeski, Director of Parks, cc cityrinks:

Otter Creek skating was supposed to start on Sat. Dec. 5/09. On Frid. Oct. 4, I biked over to see how the ice making was coming along. To my great dismay all I saw was concrete on the two pads. Apparently, the reason for this was the compressor equipment, etc needed to be fixed. I thought, the system should have been checked for problems much earlier so the ice would be ready to open on time ( Sat. Dec. 5). (It eventually opened on Tues. Dec. 8/09). The amount of money the city has, to run the skating rinks should be able to buy enough maintenance to open the rinks on time.

The skating season is so short as it is. The weekend of Dec. 5th and 6th. was ideal for skating. What a shame that there was no ice available at Otter Creek for the young kids and their families and for all the hockey players.

I believe North Toronto also did not open on time ( Dec. 5) due to thin ice. Again by preparing more ahead of time this could be avoided. Due to the low angle of the sun in November, it is I think, most possible to have ice even with warmer temperatures. Warm weather, and thin ice are no excuse for not having skating or not opening any of the rinks on their designated date. With the proper will and organization skatable ice is possible by Nov. 21. if not earlier.

So, again, it is a shame and I think uncalled for that quite a few ice rinks were not ready by the much later date of Dec. 5. These rinks are a treasure for the Toronto citizens. The long and short term benefits for the community are wonderful and numerous.

To be more positive, the maintenance people at the Hodson rink are to be commended for the quality of ice they had in November.

Thanks for your attention to this matter.

At 12.30, there are two rinks guards on the pleasure-skating side but no other skaters there. On the shinny hockey side there are 9 kids and one adult. The kids are wearing helmets but the dad is not. he tells me that he was told he has to wear a helmet but he forgot his at home. However he's still skating with the kids.

I ask the rink guards for a schedule and they say there are none left. So I take a photo of the schedule on the wall, but this makes the rink guard very anxious. "Nobody is allowed to take pictures under any circumstances" he says. 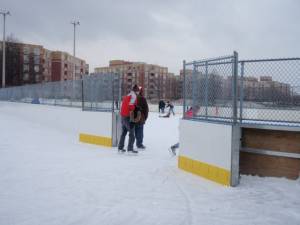 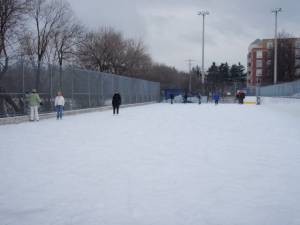 At 1 pm, the rink has the gates between the two rinks open, so it's pleasure-skating only. There are 18 pleasure-skaters on the ice. The rink house is open and there are 15 people inside changing into or outn of skates, No sign of any staff. 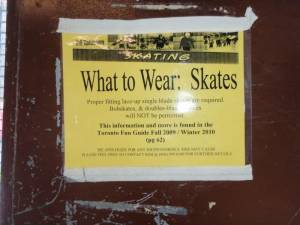