At 2.30 pm Otter Creek Rink had 21 enthusiastic shinny hockey players on the hockey side and another 17 on the pleasure-skating side, with many more in the players' boxes. They said it's exam time (the rink is right by Lawrence Park Collegiate) and a lot of the kids had the afternoon off. What better thing to do than play hockey?

A mother who was there with two young children said that normally the rink is pretty quiet on weekday afternoons. She didn't mind that on this day both rink pads were full of shinny players -- they were letting her little boy play along with them and the mom said -- this is one of the best days of his life! 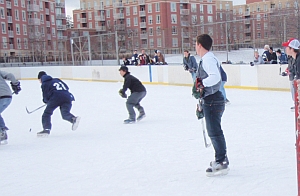 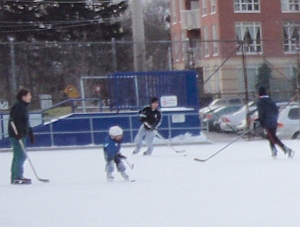