You are on the [cover page] of folder [Ombudsman File] 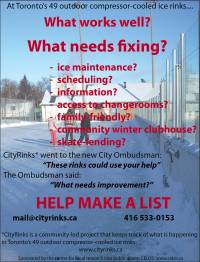 Requesting permission to put up this poster

On Friday Dec.18 at 10 a.m. we met with two staff at the Ombudsman's office. We were asked to provide them with a list of ten problems and what we would hope for as solutions. The ombudsman will then consider that list and see which, if any, of the items fall within her purview. We would like to involve as many rink users as possible in making that list, and we are therefore ask for permission to put the attached poster on as many rink and community centre bulletin boards as possible, citywide.

We would like to put up the poster beginning Tuesday December 22. Could you let us know if there is any problem with it?

I am not in a position to sanction the attached poster you wish to place at City rink locations. On the other hand, I do not intend any action should you post these at the facilities.

I cannot get the "ombudsman list" posters put up in the way you proposed. I don't think you meant to make it as hard as possible for me to publicize our request for rink user input, but that is the result.

It's clear that rink staff everywhere feel they have been instructed to allow ONLY official City notices on rink bulletin boards. This is a further sign, if we needed it, of how far the City has drifted from seeing the rinks as community gathering places (with community bulletin boards).

Also, at Rosedale Rink I could not ask the building attendant for permission to post because he said he had been told not to speak with me (I have never met him before), and he walked away immediately. Can you tell me who gave that direction, and on what grounds?

In order for CELOS to submit our file to the ombudsman, we need to consult rink users about their concerns. Our poster is quite neutral, not inflammatory. We have no intention of "plastering the poster everywhere" as you were concerned at our meeting last week. I therefore have the following request:

1. please send an e-mail to your supervisory staff, asking them to send it all the way down the line, directing rink staff to let me put up this poster.

2. Please e-mail me a letter giving me specific permission to put up the poster at every outdoor rink, so that I can print it and take it along to show the rink staff, in case the directive did not reach them internally.

I will call your office shortly to draw your attention to this request, and would appreciate if you could let me know your response today. You will note that my first request went in on December 21. After almost a month, I have spent many hours this weekend getting the same "sorry, we can't let you do that" response -- not a good use of my time.

Further to your e-mail and voice message left with me a little while ago, instruction has gone out to Parks supervisory staff responsible for the rink operations that your group can post its flyer at each rink on a bulletin board, or other suitable place if a board does not exist.

Peter Lewis, the supervisor for the Rosedale area, has spoken to the staff that turned you away last Saturday. I would like to apologize for his lack of judgement and professionalism.

At Harry Gairey Rink, the building attendant said I could not put up the poster inside the rink change area until he contacted his supervisor, but he was unwilling to contact him then, "he's very busy." So I taped up two posters outside, one on each of two bulletin boards. The other notices on the bulletin boards are between 3 and 5 years out of date. Two days later, one of the posters had been removed, and two weeks later the other poster had been removed. The out of date posters are still there, however. The (different) building attendant said that he would have to ask his supervisor, etc....

At Greenwood Rink, the rink attendant was on the phone so long that I couldn;t wait any konger, so I went outside and posted the sign on the outdoor bulletin board, which had only one other sign on it, long out of date. As far as I know, the sign was still there two weeks later.

At Glen Long Rink, the zamboni driver/rink attendant would not allow me to talk to him, i.e. to ask about taping up the poster, saying I am media and I should contact the media office.

At College Park Rink, the building attendant says he's not allowed to post anything without permission. There is no bulletin board. The staff says he'll check with his superior, later.

At City Hall Rink there is no bulletin board anywhere near the rink.

At Ramsden Rink there used to be a bulletin board, which was removed when the rink was renovated, and never put back up. The poster was put up, with grudging permission, during the Christmas holidays, but was gone in mid-January. The zamboni driver said there could be no rpelacement put up until he had received direct instruction from his superiors.

At Giovanni Caboto, the ombudsman poster put up two weeks ago had been removed but the zamboni driver allowed it to be replaced.

At Hodgson Rink, the rink guard said that normally only city notices are allowed to be posted, but that she would speak to her supervisor when he came by, and put up the ombudsman poster as soon as possible, if I left it with her. However, on the next day the poster had not been put up.

At Rosedale Rink, the rink attendant did not allow the question to be asked. He said he had been told not to speak to me, and walked away before I could ask about taping up the poster in the rink house. The zamboni crew was there at the time. Their foreperson said I could tape the poster to the outside bulletin board, but perhaps it's been removed by now.

At Trinity Rink, the two staff were locked into their office, but when I knocked, one of the staff said I could put up two posters (I had acquired another one by then, for the Toronto Playgrounds Rep League). I taped them on the empty bulletin board outside.

Asking for a meeting

May two of us come and meet with you or your staff, about a systemic issue that a group of us would like to bring to you as a formal complaint in a few weeks? It is about the de facto restrictions on citizens' enjoyment of the city's 49 outdoor compressor-cooled outdoor ice rinks. These restrictions have to do with some serious management problems at all levels, causing many of the rinks to function far under their potential, and frustrating rink users all over the city.

In your talk at Scadding Court Community Centre on Nov.25 you mentioned two requirements for making a complaint to the ombudsman:

1. The complainant must be directly affected: there are five people from various parts of the city that want to join in making this complaint, and I'd like to get another 10, which won't be hard.

2. Your office must be the last resort: we have extensive documentation for five years of attempts to remedy this situation, including many well-tested proposals to address the problems. The progress in response to our attempts has been grudging and slow, and in some rinks non-existent.