There's a phone message on the community centre phone line, saying that North Toronto Rink won't be opening until Monday Dec.7 "due to poor ice conditions."

Because it was raining, the rink guards and their coordinator closed and locked the rink at 10 a.m. That meant it was locked all afternoon, although the rain had stopped. No information about ice maintenance. 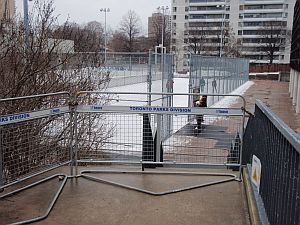 stairs to rink blocked off for the winter (no snow)

At 1.15 pm there are 20 people inside the two little subterranean changerooms. Both rinks are pleasure-skating only. One side has 10 people on it, the other has 17. There are three rink guards. I ask why no shinny, and they say that holidays are treated like Sunday. I ask about the lift gates, why they're shut. The guard tells me that the lift gates are old and one got stuck in the up position a few weeks ago, so their supervisor decided not to put them up any more. One of the rink guards says that the City is so cash-strapped that last year they didn't have money to run the inks and the Weston family had to bail them out. Hmm. An interesting fairy tale. One wonders what they learned at training.

A rink guard tells me that they don't enforce helmets for 18 and over during shinny hockey, but they do make kids wear them. 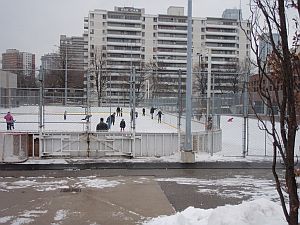 pleasure-skating only on New Year's Day 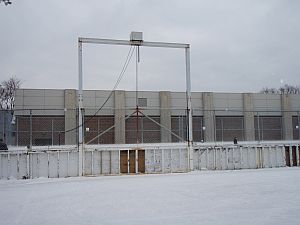 lift gate closed during pleasure-skating-only time
hosted by WordAndData.com | powered by pmwiki-2.2.80
Content last modified on December 01, 2014, at 05:38 AM EST