1pm This rink is a double pad. On one side young boys in full equipment are playing hockey. There are five skaters on the pleasure pad. The changeroom is inside a community centre. At first the CELOS researcher isn't sure which outdoor path leads to the changeroom, but he finds the room without too much problem. The change area is small and it's easy to imagine it being too crowded on a busy day. Today, however, there's more than enough room to sit and change. There are flat benches in the middle of the room while green benches with backs line one wall. The green benches could use a coat of paint and one of them rocks. There are two washrooms on the other side of the room. The staff room is on the same side as the washroom. No door connects the staff room to the changeroom but a window at the corner allows the building attendant to look in. The floor is rubberized and the rubber matting extends into the washrooms. The rubber is riveted to the floor and there are holes where the rivets poke through. The room is reasonably clean, but could use a sweeping. However, it should be noted that the changeroom is a fairly busy and it might be hard to sweep it without bothering people trying to put on skates. The CELOS researcher notices that there's no toilet paper, soap or paper towels in the washroom. There's also no hand dryer. He tells the building attendant who promptly brings toilet paper and anti-bacterial soap. However, he doesn't bring paper towels. As the CELOS researcher is putting on his skates, shinny players start to arrive. From their conversation it's easy to see these are regulars who play here often. The boys who were on the hockey pad come off and the shinny players go on. There are a dozen players of different ages and the game is fast-paced. Only one boy is wearing a helmet. There are now eight people on the leisure pad. The ice is in excellent condition except for a little snow next to the chainlink fence that lines one side of the pleasure pad. Some of the snow that accumulated there has fallen onto the ice, but it doesn't interfere with the skaters. There is no rink guard on duty, but the building attendant says there are guards sometimes.

7:45pm When a CELOS researcher calls, a recorded message says the outdoor rink is closed due to poor ice conditions. 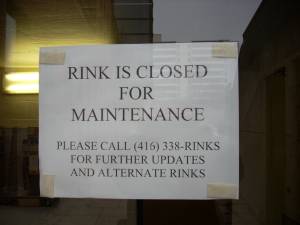 The rink was closed because of a broken water pipe. It was expected to open in a few days.