This year most of the 51 compressor-powered outdoor ice rinks in Toronto will not open until December 9. (A few will open on December 2 -- see the list of individual rinks.) In the 1980s, rink season was standard: November 15 to the first Sunday in March, usually about 14 weeks. Those are the winter weeks with the weakest sunlight, so they work best for outdoor rinks that are artificially cooled. But in the late 1990s the rink season began to lose a few days every year. Then in 2001, City Council voted to save money by cutting all the rinks down to 10 weeks a year. (The money they saved from rinks went for more parking ticket officers.)

Since winter in Toronto is quite a bit longer than ten weeks, the decision not to open the rinks until Dec.22 that year caused an outcry from skaters, and three weeks were put back in by Parks management.

City Council never rescinded its 10-week rink decision, and so every year since then has been a cliffhanger: what length of season will parks management decide this year? Because Dufferin Rink has the largest number of vocal skaters willing to lobby, for the last few years this rink has opened a week before most others. But that brings its own problems: in 2003 there was a near-riot at the rink. So many youth come to play shinny hockey at the only open rink in their neighbourhood, that they get frustrated, struggling to find enough space to play the game.

Last year Jutta Mason took a rink petition of almost 500 names to the Economic Development and Parks Committee at City Hall, asking them to return the rink season to the original length. The City Councillors on that committee showed little interest. Most of them just chatted with each other during the 5 minutes Jutta was allowed to explain the petition, and paid no attention. It seems that unless many people can arrange to book off work for the day and crowd the committee room, petitions dont help. And many people cant book off.

In the end, the 2005 rink season had some extensions at the other end: although many rinks didnt open until Dec.10, a few in every ward stayed open to the middle of March. Because the sun is so strong by then, and the ice was much too thick (insulating itself against the cooling mechanism), the rinks had to be shut down for most of those days. March is not a viable month for good outdoor ice (but November is). 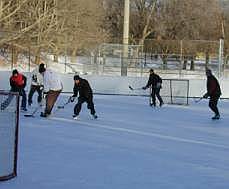 Recently, the Division of Parks, Forestry and Recreation was re-arranged pretty completely, and its still unclear how the rinks will run under the new system. We know that outdoor rinks are a wonderful winter resource for their neighbourhoods and beyond; we know that Toronto is rich in artificially-cooled outdoor skating rinks; we know that many of the rinks could be nicer places than they are now. If youre a skater and you love these rinks, consider getting on the friends-of-the-rinks list by e-mailing [email protected] (and tell your skater friends). One of these years, rink friends all over Toronto may be successful in getting the rink season back to normal.

You can also e-mail or call the City of Toronto manager in charge of outdoor ice rinks: Kevin Bowser [email protected] phone 416 394-2486