How was the ice quality?
How well were they used?
How much did they cost the budget?
- Read the March Break Booklet >> (pdf)
- March Rink Costs Math (background information)

SHRINKING THE RINK SEASONS WITH THE NEW RINK PLAN???

The Parks department is about to make the outdoor rinks more expensive to run. Outdoor rink manager Kevin Bowser already said that the rinks can't return to their ideal opening time of mid-November because the budget isn't there. Now it appears that the Parks department is making changes in zamboni staff that will add $250,000 to the cost of maintaining the ice (same amount of maintenance). The system is nicer for the staff but worse for the rink users -- and leaves even less money to open the rinks in time.

This letter serves as notification to you that your position of ARENA POOL OPERATOR 1 is being deleted effective March 10, 2008 as a result of the ongoing implementation of the Continuous Improvement Program, in Parks Development and Infrastructure Management..During this period of deletion notice, you will be provided with an opportunity to exercise your redeployment rightsIf a permanent position is not found for you by the end of the deletion notice period, March 10, 2008, you may receive notice of layoffPrior to layoff, you will be able to exercise your seniority rightsIf you do not secure a position through this process, you may be laid off and will retain the right of recall for 24 months following the lay-off date.

During this notice of deletion period, you will continue working in your present position at your facility until your position is deleted.

Although the program will present you with a number of challenges, I assure you that we will be working with you to see you through these times.

I wish you success in the future.

Friday Feb 8, 7pm-10pm, Saturday Feb 9, 9am-7:30pm: The 3rd Annual THE WOMEN OF WINTER OUTDOOR SHINNY TOURNAMENT From womens hockey organizer Deirdre Norman: Fifty women shinny players of all ages and levels of play are back on the ice to play the game we all love. Not just another pretty game, TWOW is action packed and community focused. Come on and check us out. If you normally play shinny at Dufferin Rink, that weekend is a good time to try out Wallace, Campbell and Christie Rinks. There are schedules for all those rinks available at Dufferin Rink.

News bulletin: North York Rinks will be unlocked for the public

Public use of outdoor rinks

Toronto's 49 outdoor compressor-cooled ice rinks don't get equal treatment. In North York, there are three rinks that are locked a great deal of the time: Broadlands, Irving Chapley, and Glen Long.

North York has three other outdoor rinks: Ledbury, Pleasantview, and Mel Lastman, none of which have fences. So they get lots of use. But the motto at North York rinks seems to be, "if it can be locked, then lock it most of the time."

The compressors are working just the same, and there are staff in the buildings beside the locked rinks, making sure the rinks stay off limits to the un-permitted public except for a few hours a week.

At the beginning of January, the city's outdoor rink manager said he'd tell the staff to open the rinks to the public more of the time. But there's no sign of that, and meantime winter is passing quickly. What a waste! 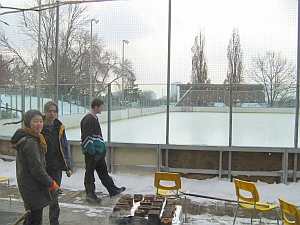 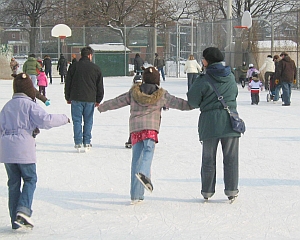 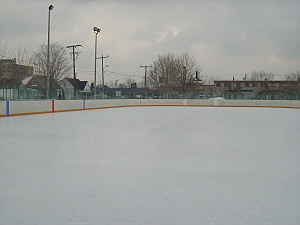 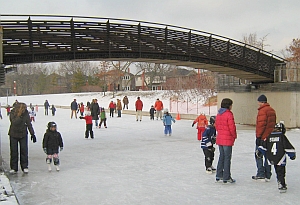 January thaw 2008: what happens to the city's outdoor rinks?

On Monday January 7, the temperature rose steadily all day, to hit 15 celsius at 10 pm. There were also periods of drizzle. But there was no sun, and even if the sun had come out, it wouldn't have made a difference -- the angle of the sun is so low at this time of year (see ice and sun) that the ice condition would be perfectly good for skating.

When it's wet under these circumstances, zambonies can take off the water, leaving solid ice. This is what happens when the water is removed: 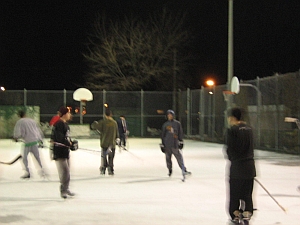 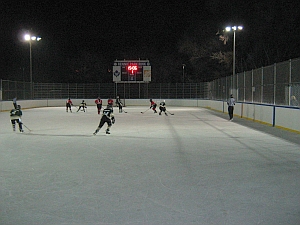 The ice was excellent despite 15 celsius because the rinks are compressor-cooled and don't rely on freezing temperatures. However, if the water is not removed, it's no fun skating, so people stay away.

On Saturday and Sunday, Dec.8 and 9, two CELOS researchers visited 24 rinks, in Etobicoke and North York. That was an eye-opener: who knew that Toronto's 49 outdoor rinks come in such a variety of styles? 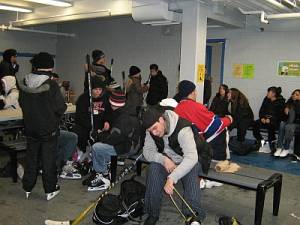 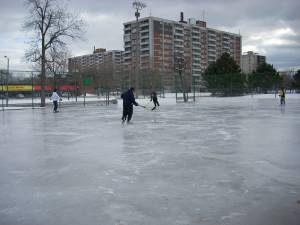 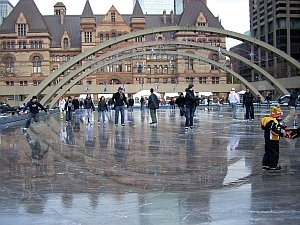 Oops....whose mistake? A CELOS rink researcher visited Albert Campbell and Mel Lastman rinks on Saturday December 1. Although the City website said both would open on Dec.1 (see the City's original opening schedule as copied December 2), both rinks were closed and neither had been flooded. A city employee at Albert Campbell said the rink would probably be open on Wednesday December 5. There were no city workers at Mel Lastman.

The City website now says Albert Campbell and Mel Lastman will open December 8 along with the rest of the outdoor rinks.

All remaining city rinks were to open on Dec.8 but now the City web site has some new information. Albert Campbell Rink (Scarborough Town Centre) and Mel Lastman Rink (North York) will open on Dec.8 (instead of Dec.1 as announced originally), but West Mall Rink (Etobicoke) and Giovanni Caboto (St.Clair and Lansdowne) have had their opening postponed to Dec.15. See individual rink details.

Mayor Miller's "cost containment" measures include keeping the outdoor rinks locked for the first third of their season. Hopefully outdoor rink users from all over the city will be able to give city councillors some good advice on changing this decision, on Friday September 14 when the Parks Committee meets at City Hall. Outdoor compressor-powered ice rinks use less energy during the low-sun months of November and December. Not opening them until the days are starting to lengthen means higher energy costs. (Earlier opening and earlier closing would make more financial sense). In addition, the City has just spent $10.3 million doing energy retrofits on all the outdoor rinks and some of the indoor ones.
Read more about the City's spending >>