GOOD PARK STAFF ARE NOT DISPOSABLE

Mayor Millers directive to cut $100 million from the citys operating budget this year, in preparation for even harsher cuts next year, resulted in staff cuts affecting the lowest-paid and most vulnerable staff at Parks and Recreation. Theres quite a range of pay in this department: 25 of its 200-plus management staff make over $100,000 a year, with additional 24% benefits on top of that. At the other extreme are the many recreation-program casual staff, who earn $20,000 if theyre lucky enough to get close to full-time hours. Its those staff who have been told that their hours have been radically cut (especially if they work in the 50 outdoor rinks). This includes students working for their tuition, and much of the new blood in the department, young people willing to put up with the wages for now in order to get established.

The mayors cuts have not touched management nor full-time union positions. Their wages are secure even if the rinks and community centres are locked and the parks are full of litter. But because the casual staff run most of the programs, shrinking their hours also affects park and community centre users the most. Treating these staff as disposable is a very bad idea. The best of them are increasingly forced to abandon their interest in public spaces and take up other work. In that way, cuts made like this are worse for public space than vandalism. The mayors plan need re-working.

PROGRAM CUTS FOR PARKS AND RECREATION 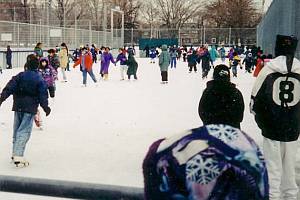 In August City Manager Shirley Hoy announced major cuts to city services that would affect most people in Toronto. The most immediate effect on Dufferin Grove is that the rink is supposed to stay shut for the busiest part of its season (the month of December). Mayor David Miller says that this is necessary because his new taxes on house sales and car registration were defeated by City Council.

From the CEntre for LOcal Research into Public Space (CELOS):

There are alternatives to Mayor Miller's budget cuts. Here is a menu of "better budget cuts" for the Parks and Recreation budget. Cutting Mondays at recreation centres and also outdoor rinks, and cutting litter picking, are cuts designed to cause "maximum distress" (quote from former finance committee chair David Soknacki) to get people's attention. There are many better ways to save money -- the list below is from analyzing the Parks and Recreation budgets since 2001, and also canvassing parks staff at various levels and locations for their ideas. Many of them also think there are better choices of cuts than the mayor's list. This is the time for park users and park workers to speak up....

1. Cut one day a month for each of the 226 (or so) management staff. Save $1.5 million in a year. Right now the City is only cutting the hours of their lowest-paid staff. Those cuts add up much more slowly (except in the eyes of the lowest-paid staff whose small wages go down even lower). Interestingly, it seems that lots of management staff are willing to take these days off, and even those few days yield an impressive saving at their rate of pay.

2. Cut one director and his/her staff, maybe the folks whose main job it is to evaluate, recommend and initiate innovative advancements in regard to service integration trends. There are now 7 directors plus one new acting director whose job it is to connect silos built by the other 7. Some of the directors make nearly the same salary as the mayor  that adds up. Save $1.62 million.

Some of the staff can be moved out into the field, they can help run the rink programs. The casual staff program wages are about $20,000 a year if they get near-full-time hours.

3. Reduce the number of Parks trash police (and their supervisor) by half. They dont keep track of how many people they catch (Freedom of Information says there is no report on their output), so its hard to know how many officers to cut, or even how many there are. But cutting four could be a good start, which leaves at least four more to do dog enforcement in their spare time. Save $400,000 (counting benefits and new trucks).

4. Move one-third of the Parks and Rec Youth Outreach Workers (called yows), over to public health. One-third of 21 means seven YOWs, those ones whose job is to provide general information and referral services to the designated youth groups, on recreation, housing, employment, education, health, other services and establish positive relationships with youth, agencies, police, schools and the broader community. Public health has lots of new funding from the Province. This staff transfer would give them new, suitable youth staff without the necessity of interview or orientation. Save $490,000 for Parks and Rec to put toward opening the City's 12 double-pad outdoor artificial ice rinks in mid-November  using the formula that one good pleasure-skating and shinny-hockey rink equals 10 good YOWs-worth of youth work.

5. Cut out the Parks, Forestry and Recreation Divisional Safety and Security Plan officers. Theyre an expensive way to do evening washroom lockup in parks and an inefficient way to relate to troublemakers. Save $350,000 (or maybe more, the project is partly confidential). Restore the recreation staff to their former role of fostering security: long-term work with youth and communities. (Instead of what they have become now: book-keepers for shrinking program revenues.) Leave the crisis work to real police officers. Parks and recreation centres were safer (and cheaper) when recreationists were still allowed to use their skills. (See by-law story "New By-law Officers" below.)

Thats $4.36 million saved for starters. Its only a drop in the bucket of the 2007 PFR operating budget of $303 million. The CELOS research group has more good suggestions, and so do some of the City workers. This list is just for the short term, to prevent the Mayors cuts from punishing citizens and front-line program workers.

One reason the Parks budget is stretched is that somewhere around $1 million has gone into hiring new Parks by-law officers in the past few years. At Dufferin Grove Park, the officers have sorted through trash bags looking for envelopes to trace illegal household garbage. They have cautioned farmers about parking in the park during the farmers market (until the market was explained to their supervisor). Most recently, Parks supervisor Peter Leiss sent them to the park on two days of the Labour Day weekend, to make sure that recreation staff had provided campfire groups with pails of water. One unit checking up on another! Surely this would be a good place to cut costs.