Monarch Rink has been added to the 17 rinks scheduled to stay open longer (until March 16). The ice was perfect this morning, but there were no skaters at 11.30 a.m.

News from an ESL teacher -- the change rooms have now been open in the mornings, when the schools come.

"I was at the Monarch Park Rink on Dec 24 during unsupervised public skate around 11am. There were quite a few boys and men playing shinny on the ice. The area was open for public skate 9-1 and 1-4 it was shinny. Along with me and two friends, there was also another couple with a child between the ages of 1-3. When the couple and child entered the ice, the boys moved one of the nets to the middle of the rink giving them half of the rink to skate on. But the puck kept flying over to their side, and the couple and child left within 10 minutes of being on the ice as it is very dangerous to have children on the ice with pucks flying around. They went ahead and moved the net back to the original place even though there were 3 other people on the ice. I had to go over and argue to have them move the net to the other side as we wanted to be on the ice as well. All of them ignored me except for one, who decided to move it, as it was very unfair. The boys know that it is very intimidating for people to be on the ice with sticks and pucks flying around, and therefore they know that people will not come on the ice even if it is public skate. Also the excuse I received was that it is unsupervised public skating and therefore they could do whatever they wanted. This is extremely unacceptable as its unsupervised public skating not unsupervised shinny hockey. If they want to be on the ice during the early times, then maybe the timing should be changed 9-1 shinny and 1-4 public skating. The rink is there for everyone to use and it should stay that way. This is also very dangerous. I understand, if the rink is empty and they want to play, but the minute people get on the ice if it is time for public skating these boys do need to get off. This is a family oriented neighborhood and parents want to bring their kids to teach them the sport. A bunch of young boys and men do not have the right to dictate what the ice times are."

"Today when we went there with the students, the change room was locked again. So it was an anomaly that the Monarch building was open one morning last week. The recreation supervisor emailed that he would see if it could continue, but we heard nothing more.

We have been taking students skating there daily. It has been hugely popular and our newcomer students are getting a positive introduction to how to keep active in cold weather.

I'm sure community members with young families would also appreciate having access to the change facilities and washrooms."

Recreation supervisors have stuck to their guns -- no single-pad rinks in Councillor Fletcher's ward will be unlocked before the afternoon. Councillor Fletcher seems to make no objection. But then there was a happy surprise: this morning two ESL teachers brought a lot of students to skate at Monarch, and the rink building was unlocked. It turns out that the zamboni driver, when he found out that all those students would be coming on such a cold and windy morning, left the building open for them. 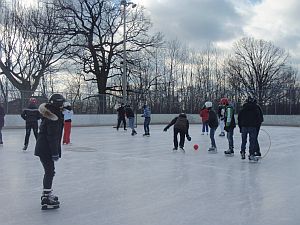 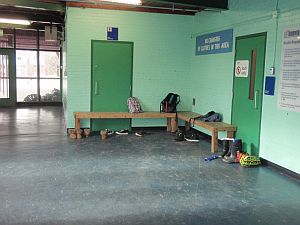 "We had two teachers with 20 students at Monarch rink this morning at 9:30 am to find both the rink and building locked.

Also, it really doesn't make sense to make the rink available and not the change facility or washrooms."

"Our classes were at Monarch Rink Tuesday morning. As promised, the rink was unlocked but the building was not. So our non-skaters (stomach ache, 1st-time jitters...) had to stand around in the cold.

Boy, it would be unfortunate if they wanted schools (our school in particular) to pay for a permit. I thought they had a mandate to get more girls, immigrants and young people in general active. On the other hand, it would generate some interesting press.

In addition to our curricular PE class skating, we're doing drop-in after school skating for the rest of the students on Mondays and Wednesdays. We really have to hustle to get there before 13-18 shinny starts at 4pm. Our school dismisses at 3pm. We got there at 3:20 this past Wednesday. Then a zamboni driver who was in training took 30 minutes to clean the ice. The shinny players were gracious enough to give our 15 skaters 10 minutes before they started. I felt we needed to vacate because a huge crowd shows up for shinny."