Mel Lastman Rink was supposed to open yesterday, according to the city web site and the staff report to city councillors. Until Friday, the city's "rink hot-line" still carried the 2007/2008 schedule information for this rink. Then the message was changed to say that Mel Lastman Rink would open on December 6. Confusion!

The reality is even more confusing. The rink has ice, with snow on top. There are skate marks, but at 11 a.m. there's only a little kid with his toy tractors, pushing the snow around. The city should take a leaf from his book -- Mel Lastman Rink needs a tractor, or even better, a zamboni, to deliver on the city's promises. 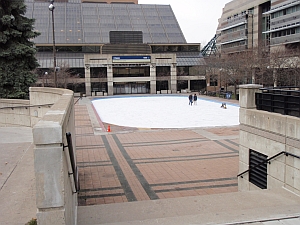 Snowy ice attracts a little kid with his toy tractors 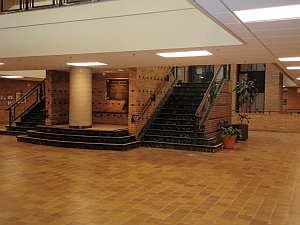 Upstairs there are two security staff at the desk. The sign above their heads says "Access Toronto." But sadly, they don't know when the rink is supposed to open and be maintained for skaters. No one has told them. But they think that maybe the ice has been in for a week already. They've tried to tell would-be skaters to stay off it, but they say it's impossible -- the skaters just come back when they're not looking. 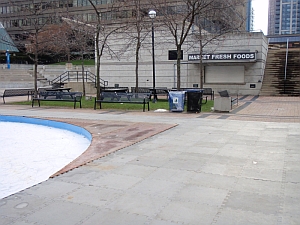 North York seems to have careful approach to materials, if not to people. Their rubber times are all laid down for the skaters -- very nice interlocking tiles, like jigsaw puzzle pieces. The outdoor rinks in other parts of the city would love to have some of those.