2:45pm There are 14 skaters on the ice and ten people standing or sitting by the side of the rink. Large sections of the ice are soft and slushy. When the CELOS researcher starts skating, he finds it's impossible to make a complete circuit of the rink because so much of it is soft. Some of the other skaters aren't actually skating. They are just standing and talking. The ice surface is not suitable for skating. 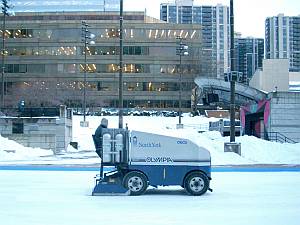 7:40pm Twenty-five people are skating on the ice that was cleaned by the Zamboni a little while earlier. There are more people standing at the side of the rink. Some of the people on the side are parents watching their children skate.

7:15pm The Zamboni, an Olympia, is scraping the ice, which is snowy and soft along the edges, but otherwise skateable. 15 people are waiting on the benches by the side of the rink: 3 adults and 12 children. Some of the children are playing in a snowbank.

This is not a neighborhood rink at all really but it also is not a destination exactly. Surrounded by a mall, the old North York city hall and one of the best Libraries in the city it ought to be a destination. The rink users are sometimes the workers from the mall or from the offices nearby or the children of those groups. The ice is always open which is why most people come here. One fellow who is practicing cross overs and skating pretty fast says that since he isn't good enough for hockey (though he looks pretty good to me), he needs to practice on pleasure skating ice. This is the only place that is really reliable he says. He will shop later for his wife in the mall.

There certainly is no risk of hockey here and the ice is unsupervised. There are no helmets available it seems and the signs say 'no shoes or boots.' This is a pity for one family who have purchased skates for their little children but neither the children nor the mom can skate. But at Mel Lastman Square, if you are trying to learn to skate, you no one can help you, there are no helmets and there are no walls to hold on to.

Snowy day. Unmaintained at 10am but maintained again at 1.30pm 3 skaters. The City website said Mel Lastman Square would be one of the outdoor rinks opening early on Dec 1, but I found the rink closed. It hadn't been flooded. While I was taking pictures, I was asked twice when there would be skating. One woman said she had been told by friends that the rink would be open. Before that I had been approached by a boy who asked if the rink was open yet. Later I noticed a young couple staring at the ice. I asked if they had come to skate. They said yes. They had checked the City website and were surprised to find the rink closed.

I also spoke with a fourth man. He saw my skates and asked why I was taking pictures. I told him I was doing research for CELOS, a non-profit group that was concerned with issues related to parks and public space. He said that he had travelled to thirty cities around the world and Toronto was the best run. He said it wasn't such a big deal that the rink wasn't open yet and that people should cut the City some slack. I replied that Toronto might well be efficient compared to other cities, but that was no reason to ignore shortcomings when we find them. The man was persistent and didn't seem happy that I was there. I thought he might be a City employee but he said he wasn't. A beautiful setting, but the rink was closed Snow on an unflooded rink pad