YouTube short showing skating and ice-fishing on the pond.

Canada's favourite pastime is on its way to being an indoor-only sport in some areas of the country, a new study warns.

Lawrence Mysak, co-author of the report and a professor at McGill University in Montreal, Que., said warmer winter temperatures caused by climate change is restricting the operation of ice rinks.

"We were able to see that in general, the rinks were being opened later and later over the last... 50 years, and secondly that the length of the season has also shortened by... one or two, sometimes three weeks," said Mysak from his office in Montreal last week. 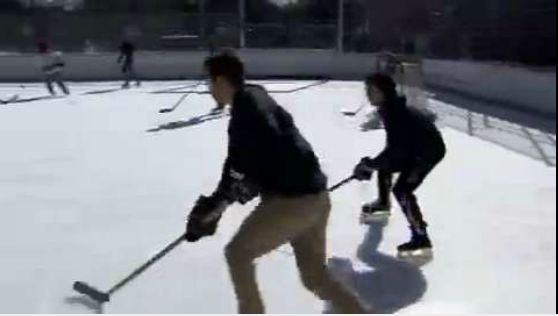 The future of Canadian outdoor ice hockey  a sport synonymous with the countrys culture  is being threatened by anthropogenic climate change, new research suggests.

As warmer winter temperatures restrict ice from freezing over, researchers believe the ice hockey stars of the future will have limited access to the frozen lakes and backyard rinks that have helped shape the careers of some of the greatest professional players, such as Wayne Gretzky; the Canadian considered to be the greatest of all time who started skating as a child on a rink in his backyard.

Evidence of this was seen earlier this year when the worlds longest skating rink, the Rideau Canal Skateway in Ottawa, was closed due to warmer-than-usual seasonal temperatures.

Five years of meticulous analysis by researchers at McGill and Concordia universities tracked evidence for the significant shortening of the outdoor skating season across Canada.

Fewer backyard rinks and less time on the ice means an attack on a critical component of Canadian identity and culture, the study says.

Wayne Gretzky learned to skate on a backyard skating rink.

Could hockey-mad Prime Minister Stephen Harper be persuaded of the dangers of climate change by the spectre of the end of backyard shinny?

Outdoor ice hockey could perish in some areas of Canada: study

Canada's favourite pastime is on its way to being an indoor-only sport in some areas of the country, a new study warns.

Lawrence Mysak, co-author of the report and a professor at McGill University in Montreal, Que., said warmer winter temperatures caused by climate change is restricting the operation of ice rinks.

"We were able to see that in general, the rinks were being opened later and later over the last... 50 years, and secondly that the length of the season has also shortened by... one or two, sometimes three weeks," said Mysak from his office in Montreal last week.

Mysak fears the gradual warming of the earth caused by burning fossil fuels could eventually cause the beloved outdoor activity to perish in several decades.

"We're running our compressors and our chilling plants a lot more aggressively. This year alone or hydro consumption was up considerably -- you know -- four or five-fold more expensive."

Editor's note: this is unlikely to be the case.

Kids skate and slide on outdoor ice rink thanks to residents

It's amazing what a little ice rink can do.

Separated by a snow fence from the rest of Elizabeth Simcoe Park in Guildwood, 10 children were on skates Monday afternoon racing, jumping, turning tight circles, sliding or just laying on the ice, which neighbourhood parents had created.

"It's a lot different from being inside on an indoor rink," said Scott Wardle, 9. "There's no stands, there's no boards. The ice is kind of bumpy but it's still very nice."

Ice pads on baseball diamonds and other patches of grass were once common in east Toronto. It seemed like every park had one, said Hilary Wollis of Friends of Elizabeth Simcoe Park.

"That was a big part of our childhood."

Now it's a novelty for children in Scarborough to skate outdoors as they once did, said Wollis, surveying the park rink's homemade benches and plastic milk crates guarding a corner with rough ice.

"We have lost something over the decades by not doing this." Read more >>

When Deirdre Norman began playing shinny with her husband and son eight years ago, she noticed "a huge discrepancy" between men and women's ice time.

That was the catalyst for The Women of Winter Outdoor Shinny Tournament in Dufferin Grove Park, which Norman founded in collaboration with Toronto parks and recreation.

"I thought we should have a celebration on our outdoor rink," said Norman.

Part of the city's parks and rec programming, this year's tournament takes place over the Feb. 3 weekend. The city provides the ice and facilities and The Women of Winter, led by Norman, run the tournament which has been gaining momentum since its inception seven years ago.

Lucky Torontonians get to skate in the rain

Our outdoor hockey road trip seemed to be taking a turn for the worse as we drove through the pouring rain into Toronto. The temperature was well above freezing and conditions looked more favourable for a swim than for a skate.

But as we got farther into town, we started to spot games of shinny hockey in large, well-lit outdoor rinks. We soon discovered Canadas metropolis has the best winter can offer: 51 outdoor rinks, all outfitted with refrigeration systems  the most compressor-cooled outdoor rinks of any city in the world.

This means that one of Canadas warmest places has one of the countrys longest skating seasons. The cooling system can keep the surface hard and smooth up to 15 C, so T-shirt hockey in March is common.