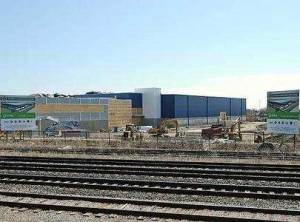 AARON HARRIS/TORONTO STAR
New four-rink complex, above, being built in conjunction with MLSE,
sits near the Lakeshore Lions Arena in south Etobicoke.
The community would like the city to put a rec centre in the old
arena to benef it area children.

Money set aside more than 15 years ago for it now is being spent on another project by the city, leaving the Lakeshore Lions Arena, about to be mothballed as a hockey facility by a new four-rink complex nearby, as quite possibly the area's last hope.

But that's only if the next development plan by Maple Leaf Sports and Entertainment, this time for a soccer practice facility for Toronto FC, gives the old building life.