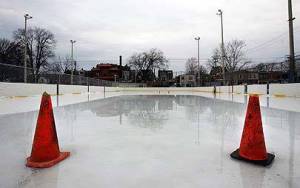 AARON LYNETT/TORONTO STAR
Water pools at Harry Gairy ice rink at Dundas and
Bathurst Sts March 3, 2008 as
warm weather triggers a thaw.
The rink had closed for the season but council
is considering a season extension.

"I do support it," Councillor Paula Fletcher, chair of the parks and environment committee, said of a proposal to keep rinks open until March 16.

"I think it's important that kids are able to skate during March break, weather permitting.

I want to ensure that kids that are home and families that are together have the opportunity to skate," Fletcher said.

All but eight of the city's 49 outdoor artificial ice rinks closed Sunday for the season.

Councillor Case Ootes has moved to keep them going another two weeks, an idea expected to be debated today by city council. Ootes said he understood a two-week extension would cost an extra $200,000, more than the $160,000 MasterCard donated to the city to cover the costs for December.

But Fletcher said the costs have to be clarified, and that officials should scour parks and recreation budgets to find the money.