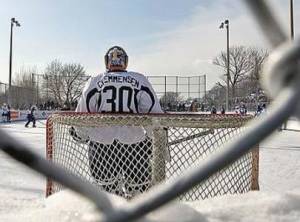 There's nothing rinky-dink about this latest Maple Leaf power play.

The City of Toronto's crumbling arenas are getting a $1.5 million facelift from Maple Leaf Sports and Entertainment, in partnership with Home Depot, to keep aging facilities functioning for kids who skate and play hockey.

Over the next five years, a minimum of three Toronto indoor and outdoor arenas will be renovated annually, with MLSE providing the funds and Home Depot pitching in with materials and labour from employees volunteering their time. The City of Toronto's department of recreation, forestry and parks will select the structures with the most pressing repair needs each year.

MLSE and Home Depot have already repaired seven outdoor rinks (with new flooring in change rooms, new boards, painting, etc.) over the past three years. Now, MLSE has sweetened the pot by bolstering Toronto's antiquated indoor infrastructure, which is well past its bricks-and-mortar lifespan.