The Star: Closed Just When You Need Them

The Star: Closed - Just When You Need Them

City cites costs, iffy weather for decision to keep most rinks shut. The shinny crowd is not amused 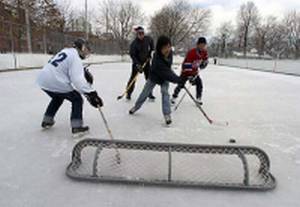 RICK EGLINTON/TORONTO STAR
It was shinny time in between snowstorms at city-run
Dufferin Grove outdoor rink.

"Clack, clack, clack. The sticks hit centre ice, only to be tossed to one side or the other in a random draw to choose teams among these two dozen men, mostly strangers to each other. Here for a game of hard-skating shinny.

"I don't know anybody here except this guy, and we're about to play a hockey game," says Andrew Song, 21, motioning to his friend Jake Lee.

Both of their parents are immigrants from South Korea. They've been playing since they were 4. "We live in Canada," he nods. "This is essential.""