By: Lois Kalchman
Published: February 06, 2008
Source: The Star
To read this article in the Star 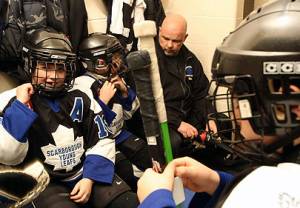 The Scarborough Hockey Association will be "out of business" and the city will have to take over caring for 2,900 players if Toronto's proposed increases in ice rental costs go through, says its president John Kelloway.

The city revealed a budget on Monday that would see the cost of renting rinks rise 15 per cent to 34 per cent.

"The increase would put us out of business," Kelloway said yesterday, explaining it would add an additional $134,000 to the cost of running the 44-year-old association.

"Within 48 hours after they make it official, I will be calling a meeting of our seven organizations. If I read my presidents right from our meeting (Monday) night, we will be handing over the responsibility of our 2,100 house league and 800 competitive players to the city. The City of Toronto will be in the hockey business with all its expenses and paper work."

The Scarborough association and other regional groups like it are affiliates of the Greater Toronto Hockey League, a nearly 100-year-old organization that oversees local minor hockey. They are independently managed bodies with separate budgets and boards.