You are on the [City News: City Councillors Vote To Keep Outdoor Rinks Closed] page of folder [Media 2007-2008] 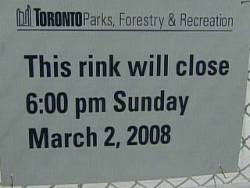 It still feels like winter in the city of Toronto, especially after Wednesday's snowstorm, but if you're looking to take another turn around your local ice rink before spring finally does arrive you might be out of luck.

City councillors voted against a bid to reopen 41 outdoor rinks for March Break. They shut last Sunday. But with the GTA still in winter's grip, some politicians felt it was worth reopening the rinks to give fami lies something to do when the kids are off for a week.

The City's Parks Department said it would cost $380,000 to reopen the rinks and rehire seasonal staff, w hich is why most voted against the plan to keep them open longer. There are still eight rinks open if you're wil ling to travel to them, and they don't shut down until March 16.

Which rinks are currently still running? Find out here.