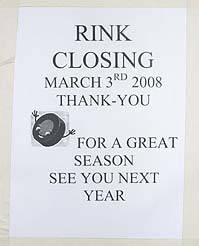 If you freeze it, they will come. Councillor Case Ootes wants to see all 41 of the city's outdoor skating rinks stay open for March Break next week -- as long as the cold weather holds up.

All but eight outdoor rinks closed Sunday and the remainder are scheduled to shut down March 16, the last day of March Break. "Why are we keeping some open and not all of them?" Ootes said yesterday. "The winter is long enough as it is. If it's an opportunity to keep them open and have people enjoy themselves, kids enjoy themselves, then we should keep them open."

He called last Sunday's date to close the majority of the rinks "arbitrary." Ootes said he is waiting to hear the cost of keeping the rinks open, but Councillor Sandra Bussin pegged it at around $225,000. The money to reopen the rinks should be taken out of the nearly $1.4 million in extra funds found this year for arts and community grants, Ootes said.