You are on the [cover page] of folder [Mc Cowan Rink]

You are in the Mc Cowan Rink folder

East of Brimley, West of McCowan, South of the 401, North of Ellesmere, in the Scarborough Town Centre. See Satellite map

Rink change area: Bright and warm, with good visibility toward the skating surfaces

Helmet use: leisure skaters under six

Cityrinks.ca position paper: is the city's helmet policy in need of an update? Should little kids be forced to wear only CSA approved helmets?

Maintenance: appears to be well maintained

The skate lending library is scheduled to be at this rink between 1 and 7.30 p.m. today. 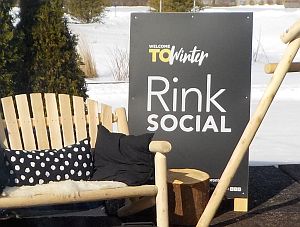 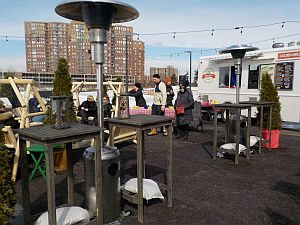 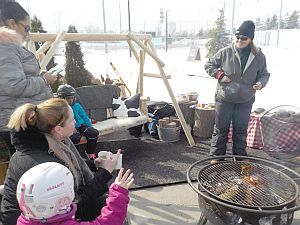 campfire with April from Evergreen 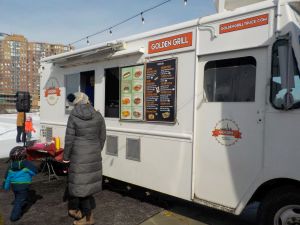 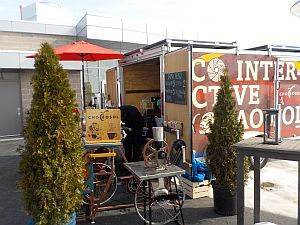 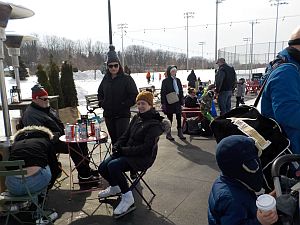 nice places to sit and eat 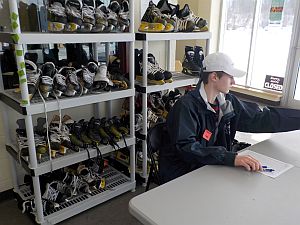 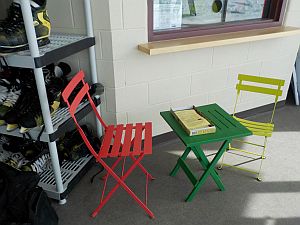 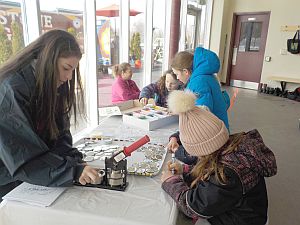 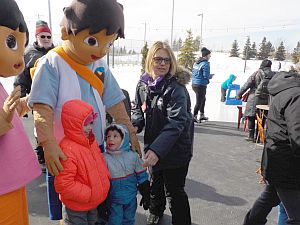 The rink opened for the season. The repairs must have been successful.

The rink seems to be running fine again.

The city's website has a service alert for this rink. saying that "shinny is cancelled due to broken boards." Boards are tough but they can break if the zamboni runs into them....

Sadly, the city's website schedule for this rink was not up to date and now it has disappeared entirely. 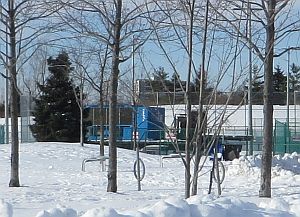 This rink had a problem starting up, and will need to have its pvc pipes replaced this spring/summer (they carry glycol to freeze the ice). For the moment, there is a temporary rink on top of the existing hockey slab, supplied by a global equipment rental company called Aggreko, headquartered in Glasgow Scotland. The company rents out energy equipment worldwide including at combat sites and for natural disasters. Their sports rentals include equipping Olympic sites, but also making temporary rinks: example.

The skating trail, also needing to be rebuilt, is fenced off and covered with snow. 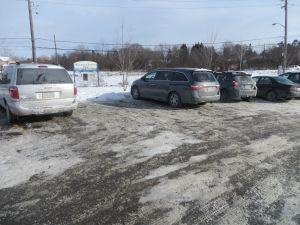 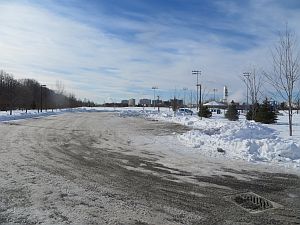 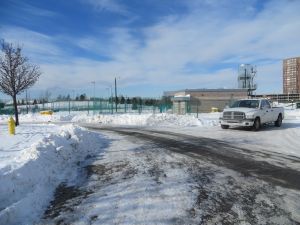 skaters walk along the road.... 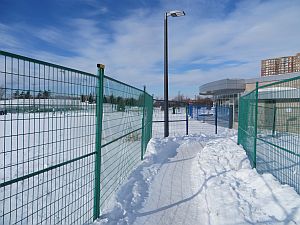 ...and along a well-shovelled fenced-off path... 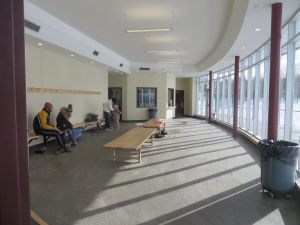 into a sunny changeroom with lots of windows... 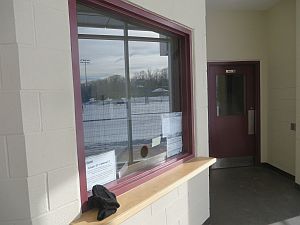 ...but a glass barrier with a little hole for talking to staff

Today there were four staff in the office, and because it's hard for rink visitors to hear what staff are saying, through that little hole, the staff invite skaters to come to the office door and talk from there.

Certainly the large glass barrier -- with just that little hole for talking -- reinforces the current city fashion of making the rink staff act like security guards rather than like welcoming recreation workers eager to help people learn how to skate. Permission to take a photo of the office window was only granted when it was certain that there would be no person in the photo. Rink staff are trained to focus on enforcing special helmets for shinny hockey and kids under 6, and preventing photography of skaters. 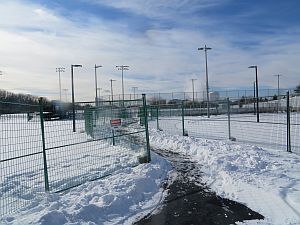 There is a well-shoveled fenced path to the hockey pad... 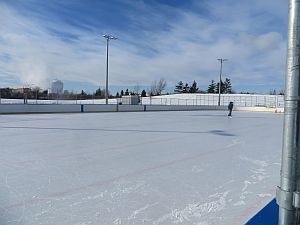 ...which is shared-use for this season

Staff were very friendly but clearly under-employed. They said that the rink has not been very busy -- no surprise -- since the temperatures have been very low. At the time of this visit, it was a bit warmer -- minus 10 and sunny -- and some people were skating.

When told about the Cityrinks loaner skates offer, the staff said that the reason why the city could never do skate lending was most likely "liability." The magic word.

9.45 a.m.: called 311 to let them know that the McCowan snow removal service alert is still posted there. It was corrected in early afternoon.

The "service alert" notice has been posted on the city's website, unchanged, for the past three days: covered in snow, snow removal in progress.

Staff have stated that they had the snow clearing issue which took far longer than they hoped due to misuse of the rink after hours (rink was utilized over night while snow covered, the public electing to clear the snow into the boards) which necessitated staff to hand clear the majority of the snow from the rink instead of utilizing equipment. Staff had mechanical issues with the ice resurfacer and last night there were electrical issues and the ice rink lights would not come on.

Staff is working very hard to overcome all of the issues and are committed to providing the posted service hours to the community.

The city's web page says the rink will partially open on Dec.9. However, it was marked as closed all day -- but Mayor John Tory was shown on TV at suppertime, skating there.

Unfortunately, the opening of the ice rink and skating trail has been significantly delayed due to the failure of the refrigeration system. The failure of the piping became apparent when the contractor began to start up the system in preparation for the scheduled January 2017 opening. It has been determined that the refrigeration piping embedded in the concrete slabs failed. Investigation has found that the piping blistered, expanded, fractured and broke in some locations, however, the exact reason for the failure of the piping hasn't been determined. Investigation into the causes and possible solutions is ongoing.

The City has arranged for a temporary refrigeration system to be installed on the rink. This will allow skating at McCowan District Park in early December, weather permitting. The skating trail will not open this year.

On the city's outdoor rinks web page, the McCowan District Rink link now says "closed for the season," with this announcement:

We regret that the new ice rink and skating path will not open as planned during the 2016/2017 skating season due to technical difficulties encountered during construction. The new rink's opening will be delayed until the 2017/2018 season. Our apologies for the inconvenience.

The councilllor comments on the delay.

On New Year's day, the sun shone on the new rink construction area. There was a wide opening in the barrier fence, with many footprints of others presumably looking to find out what stage the new rink was at.

Jan.1: wide opening in the fence, hockey rink on the left 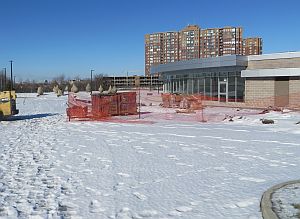 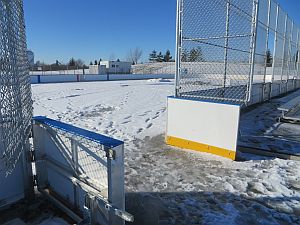 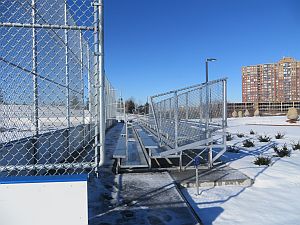 lots of seats for spectators 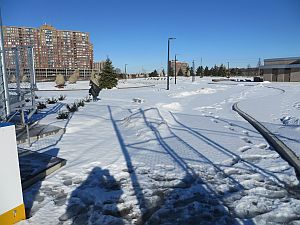 where the skating trail meets the hockey rink 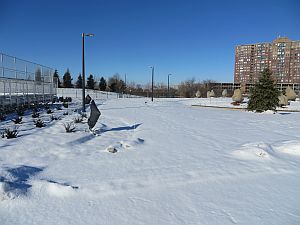 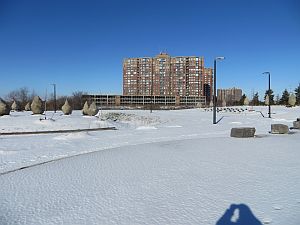 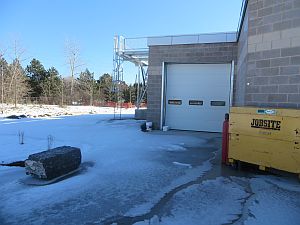 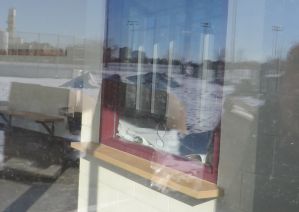 The office window appears to have plexiglass with a small porthole for staff to speak to the public -- for staff safety?! The rest of what could be seen though the change room windows looks like modernist benches and coat hooks and washrooms in blond wood. No space for skate rentals or snacks or neighbourly socializing. Too bad. 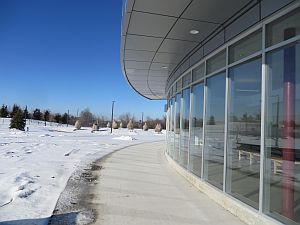 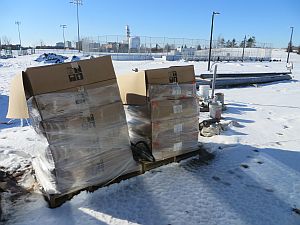 Views of the rink

The paper schedule at the rink is as follows: