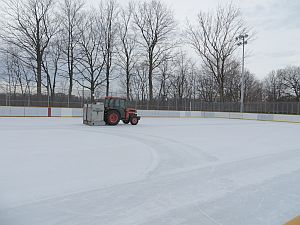 According to the city's outdoor rinks web page, this rink is still CLOSED since the ice storm (from Dec.22 2013). But in fact the ice has been open 10 am to 10 pm and maintained since Jan.3 (only the building has been closed).

The ice was being scraped and flooded at 11 a.m. The operator said the rink has been open every day -- unlocked every morning at 10 a.m. and locked again at 10 at night. Ice maintenance was limited to scrapes while the water was not going. Now the water is back on and he thought the building would open this afternoon.

The rink is still listed as "closed - no water." But in fact the rink opened yesterday, lots of people skating.

At 10 a.m. the city's website says that West Deane will hopefully open by noon. But it didn't.

The rink is closed, with a sign stating that fact, but with no actual information. There are some city trucks in the parking lot, but they're from Transportation, just meeting up there at their lunchtime. One of the workers says he thinks the pipes may have frozen during the ice storm power outage, which lasted four days in this neighbourhood. But it's more likely that the rink was drained when the power went out, and has not been put back into service. 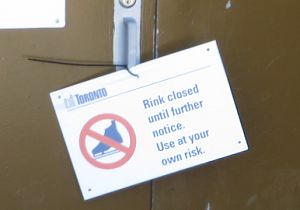 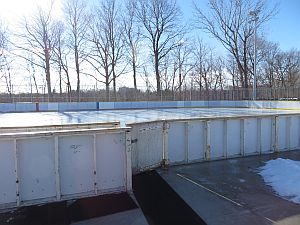 rink has ice but fence is locked

Our rink rarely gets used during the week, not even by school classes. There are really only 2 schools within walking distance that utilize the rink for school visits and even then, it's at the discretion of individual teachers as to whether or not they WANT to take their classes skating!

Public skate is available Friday night and Saturday/Sunday afternoons, but the rest of the time is taken up with shinny. They used to have Wednesday nights available, but I'm not sure they are still offering it this year (Ed.note: no).

Our parent council holds a family skate night every year in January and this year we've added a Sunday afternoon in February.

It would be nice if there was more use of the facility, though!

The rink is open from 9 am to closing, so that anybody who wants to skate in the morning can change in a warm change room, and use the washrooms too. The foreperson says that the rovers go from rink to rink to check on them regularly/irregularly, but there's not always someone on site. He says that no one behaves badly there, even though no staff are around.