I took my kids to the rink today to play some shinny hockey as we use the rink for their hockey league every Sunday. We really enjoy the ice there and I read the website to see when the ice was available for Shinny. It said that there was a child and caregiver shinny from 12:30 to 2pm and then a children's one from 2 until 3:30pm. When we got there we were informed that my son who was in full goalie equipment was not allowed to be on the ice as it was a rule, I do not understand this rule and it is not stated anywhere on the website. As we were leaving we saw some teens that were preparing to go on the ice. My question is that how is it that the rules can be broken to allow teens on the ice during the wrong times but my son that was with me and fully equipped was not allowed to play.

Can someone please address these concerns for me....I have 2 boys and they are 8 and 10....There was one other man with a young boy that was looking forward to having a goalie for his son to shoot on. At that point a teenager about 15 came and asked if he could play as well. When we came back there were only older kids there as well as a new set that drove to the arena in their own cars so they had to be at least 16 that were playing during the children's shinny time. There were at least 5 on the ice and another 5 heading in to go on at that time. All we wanted to do was give my sons some practice time and I am not sure why we were unable to do so. Why is there a rule about no goalies during shinny? 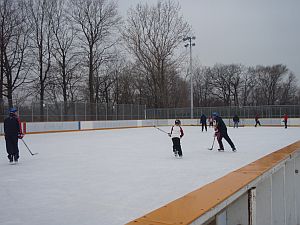 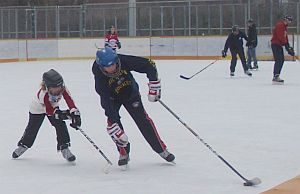 all youth except for one

The CityRinks visitor found six shinny players on the ice during the children's shinny time listed in the city's website holiday schedule. Five were over age. In the change room, one more boy was getting his skates on, but his mother said she was worried. Four other youth were getting their skates on too, and she said she wasn't sure it was safe for her son to go on if the hockey was going to be older, and fast.

There were two rink guards, who said they would speak to the youth and tell them to be careful and not be too fast. But there were so few kids there, they said (there was one other girl on the ice), and so they didn't want to have to turn all the youth away.

The only public youth shinny time on offer on Wednesdays was in the morning, but clearly the pressure was there from the youth, to be allowed to play more. The rink guards said that Martingrove has no public shinny times in the evening, not even during the holidays.

The rink guards also said that the Martingrove holiday schedule they have doesn't match the city's schedule. But there were no more copies of the local schedule except for one taped high up inside the office window. The writing was too small to read. The rink guards also said that no one could find the website schedule online, but the mother of the boy showed them the schedule on her i-phone.

When asked about the rule saying "no goalies," the rink guards said that the rule was taught to them during their training, because of "liability." However they could not find it posted on any of the schedules or rule boards that were posted at the rink. The guards said that earlier in the week, when a parent had questioned the "no goalies rule" for her child, they had advised her to go to one of the unsupervised rinks nearby and let her son practice there. His reasoning was that on an unsupervised rink there would be no liability issue.