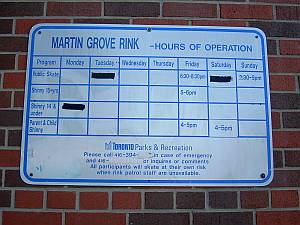 2:30pm I arrive exactly at 2:30. As I enter the rinkhouse, I notice that part of the schedule posted on the blue and white sign by the door has been taped over because there was a discrepancy between the sign and the times posted in the Etobicoke (City West Region) skating brochure open pdf. Earlier in the season the wrong times had not been taped over.

The changeroom is big and there are plenty of benches. It looks almost the same as the changerooms at Sunnydale Acres and the Westway. There are three smaller changerooms on the side. There are bulletin boards with recent notices. The Etobicoke rink brochure schedule and other notices are posted on the window of the staff room. The staff door isn't marked, but I think the windows and the notice would make it obvious to anyone that this is the office. The door isn't locked. There is supervised public skating today from 2:30-5pm. It is cold and windy. During the hour and a half I spend at the rink, there are at most 11 skaters on the ice at one time. There are, however, three employees on site: two rink guards and a rink operator (Zamboni driver). A rink guard and two skaters tell me the rink is usually busier. They say it is quiet today because of the cold. The rink is on top of a hill and the guard says this is a windy rink. It's certainly windy today.

When I arrive, there are hockey players on the ice, all wearing helmets. The rink guard says she let them continue playing because no one is here to pleasure skate, but offers to clear them off the ice for me. I tell her I've come to the rink to gather information for a community group and that she shouldn't clear the ice just for me. She is friendly and willing to answer questions about the rink. She is a high school student who works at other rinks at well.

She also works for the Etobicoke Speed Skating Club, which uses the rink on Tuesdays and Thursdays. Membership in the club costs $50 for adults ($30 for children) if you skate only on Tuesdays and $100 ($60 for children) to skate on both Tuesdays and Thursdays. There is also a $20 fee to rent skates for the season. (The skates are kept at the rink.) It costs $5.00 to try it once. A sign on the bulletin board advertises the club. I've also seen signs about speed skating at Martingrove in the West Mall rinkhouse.

While we are talking a second pleasure skater arrives. The guard tells the hockey players to leave the ice. The guard says this is a popular rink because the ice is good. The ice is hard, but I notice some leaves buried in it and there is snow at the ends as well as along the edges. This is snow that has blown onto the ice. Also, the hockey players have left a lot of ruts in the centre.

There was one rink guard on the ice for a short time at the beginning of the public skate period when there are two other skaters on the ice including myself. I ask her if she has to be on the ice when there are only two skaters. She says she supposed to be, but adds it's very cold. The other rink guard comes onto the ice. The two chat for a few minutes and then the other guard goes back in. I notice that he takes the time to put on a helmet and orange safety vest even though he's only on the ice for a few minutes. After about twenty minutes, the first guard goes in. When I leave the rinkat 4pm, both guards are in the staff room with the rink operator. (The room does have a window that gives a clear view of the ice.)

Before leaving, I want to ask the rink operator some questions about maintenance. He confirms the rink has its own Zamboni in a garage and that there is a rink operator on duty Monday-Friday 3-11pm and all day (2 shifts) on weekends as there are at other Etobicoke 'major' rinks. However, when I try to ask more questions, he says he's not supposed to talk to me because he has been instructed to refer all questions to the Media Relations Line 416-560-8726. He says this is to avoid giving out wrong information.

Rink operators at other Etobicoke rinks have been willing to answer questions. I ask him who gave him the instruction, but he doesn't answer. I tell him I'm doing research for cityrinks.ca and that I have been asking questions at other rinks. I ask whether the instruction he received has anything to do with my visits. He says no. He has never heard of the website before today.

1:45pm There is adult permit hockey on the ice. Two of the players also play at Dufferin. The ice is in reasonably good shape but it is lower than in downtown Toronto (South Region) rinks. The ice is particularly low near the boards. One of the players says they weren't able to play at the rink on Monday. 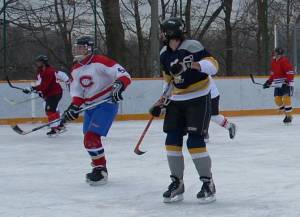