You are on the [cover page] of folder [File Cabinet]

Here we file material about many of the varied storylines behind the rinks. For a more thematic listing of topics, see the About our rinks tab on the home page.

We track some of the dialogs with City staff regarding operational and management issues that arise regarding the rinks. See Problems And Followup.

Read what skaters have to say about Toronto's rinks.

In the fall of 2007 City Hall for a time decided to delay outdoor rink opening until January, to save money in a budget crunch. We joined with other Toronto citizens, and organized a save our rinks campaign, and alternatives. In the process we collected comments from Councillors, and rink users. Eventually Mastercard bailed the city out with a $160,000 gift. But we're worried that the fight isn't over yet.

See our Reports section for reports that help to disseminate information about rinks issues.

For example in Problems and Followup, we record correspondence with the city about maintenance issues.

Why We Love Outdoor Rinks

The Rink Diaries collect stories from outdoor rinks all over the city. In Why We Love Outdoor Rinks we collect some of our favourite stories from the diaries. A great read!

Go to Why We Love Outdoor Rinks >>

From the unMaking of Dufferin Grove Book

Outdoor Rinks And Weather explains why it would be better to open rinks from mid November to end of February, rather than December to mid March (it's the angle of the sun). See Weather Summaries for a bit of a history of weather.

Making rinks work: CELOS has created a booklet containing over 10 years experience in making rinks work. Hint: campfires, good food, and family times help. What Needs Fixing and Cheap Design tracks some details of what could make some of the rinks better.

Rinks by the numbers is a start at extending our investigation of city rinks budgets. Right now it's a "public filing cabinet" where we link any material we can find that can help us figure out rink costs, including staff allocations.

Rinks by the numbers also gets into some information about Toronto's Parks, Forestry and Recreation department. For example we found that in the last 10 years or so PFR's operating budget has increased an inflation adjusted $60M, with an increase of over 700 employees. Yet it's hard to see the benefits on the ground.

See What Needs Fixing, How To Fix It, and Rinks Management And Maintenance.

Management Board Idea: In 2006 City rink staff let the ice at Dufferin Rink and others get 6 inches thick. It's only supposed to be (at most) 2 inches thick, for compressors to work well. A fight ensued. There was even a meeting about having a Management Board take over the rinks. Some useful information about the idea was collected, and you never know...

Rinks Management and Maintenance: With all the uncertainty, CELOS is compiling lots of information:

MLSE has entered into agreements with the City of Toronto regarding outdoor rink maintenance projects. Read more>>

The City of Toronto is often reluctant to share information with its citizens. In those cases we rely on the Province's Access to Information legislation to obtain critical information from the city. Here are some of the requests that we are pursuing, as tracked in our Freedom Of Information section:

The friends of city rinks (formally through CELOS) wants to do what it can to preserve and promote what we think is a precious resource - the 49 public outdoor rinks jointly owned by the citizens of Toronto. One way of doing this is by assembling and distributing a variety of reports to explain issues, and highlight challenges to the outdoor rinks community (including users, and staff at Parks, Foresty, and Recreation). Here are the reports that we currently publish. Read more>>

These are home page announcements from the 2009-2010 season, and have some historical interests. Read more >>

A collection of material that is outdated, but that we want to keep for the record. See website Archives.

Save our rinks campaign

Save our rinks campaign, fall 2007. City Hall was going to defer opening the rinks to January that year. This site generated alternative proposals, and identified a long term problem. 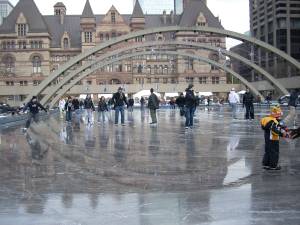 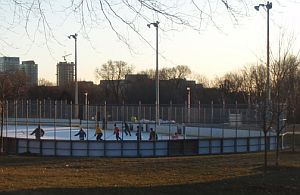