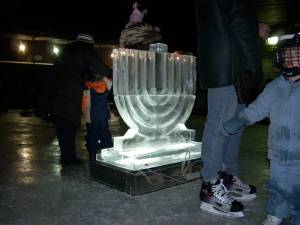 A large crowd of parents and children gathered at the rink tonight to celebrate Chanukah on Ice, - an event organized by the Jewish group, Chabad on the Avenue. The focal point of the evening was the lighting of a menorah made of ice. After the ceremony, Men on Ice performed some figure skating routines featuring Robin Hood and men dressed in orange ballet tutus. There was a DJ playing rock and disco music as well as some Jewish songs. For the children there was a raffle and a game of guessing how many coins there are in a jar. The rink-side barbecue had a lot of customers. The mood was generally upbeat. People seemed happy to be there, though some of the children didn't like having to get off the ice for the performance. As soon as the Men on Ice show was over, young hockey players were jumping back on the ice. There was, however, a safety issue. The menorah's electrical cord was left exposed on the ice and people were skating over it. No city employees were visible, though they might have been hard to spot in the throng. An eager crowd waits for the menorah to be lit People gather around the rinkside barbecue The changeroom is on the edge of the ice Skating around the menorah

10:45am Temperature: High 0 celsius, Low - -3 celsius. The rink is located in a park on the west side of Ledbury Street, just north of Fairlawn Ave. (See map.) The rink is laid out like a river. It's a long rectangle set in an artificial gully with steep banks on either side. The path through the park takes you to a bridge that crosses over the ice surface. The changeroom is at the south end of the rink near the bridge. It has floor-to-ceiling plexiglass windows that look out over the ice surface. It is rather small. There are benches. The floor has a rubber surface that extends into the washrooms. The day we visit there are shinny players on the ice, fathers and sons. There are thirty children, mostly boys, on the ice, but it's hard to keep count because players keep arriving. We speak to a man on the bridge who tells us his 12-year-old son skates here. He says it is a safe rink. He feels comfortable leaving his son here alone. He says "kids" play here all night "until they can't see any more."