You are on the [cover page] of folder [Leaside Rink]

You are in the Leaside Rink folder

A project of CELOS

Natural Ice Rink: This rink is not operated by the City of Toronto 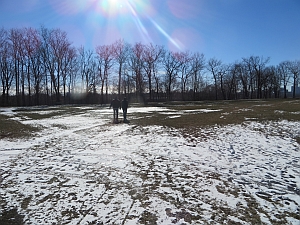 At 9.30a.m. on a pleasant Saturday, there were no skaters on the ice. It's a nice big natural ice rink, but it was a little hard to figure out how people even get on the ice, since there's a lot of snow and there are no shoveled paths to the rink. There are no benches set up for people to sit on while changing their skates, but there are a few picnic tables not too far away. However, to be useful, they would need a path shoveled from the tables to the rink. 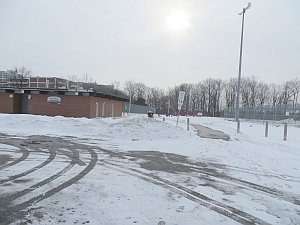 building on left, right behind on right 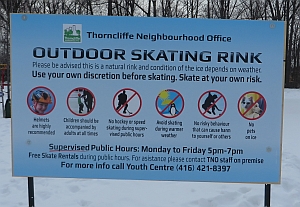 This rink is not a community rink -- it's a project of the Thorncliffe Neighbourhood Office (TNO). They have skates available to borrow, but only for two hours a day (between five and seven pm), because the skates are stored some distance away, in a side room off an underground garage that mostly stores valuable antique cars. 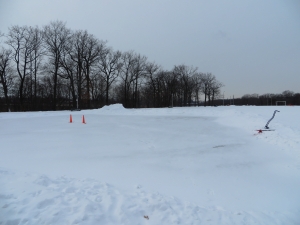 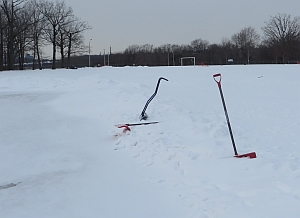 shovels set out for anyone to use

A teacher from nearby Morris Cody School says they would like to bring their students to skate, but they can't because there is no washroom access. Actually, the summertime outdoor swimming pool/tennis club building is right there, and it has washrooms as well as storage rooms where the skates could be put near the rink. But at this point the official word is, wintertime access to this City Parks facility is not permitted. 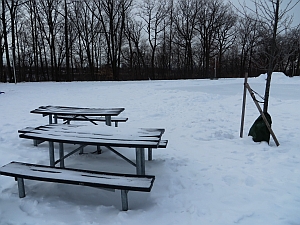 snowed-in picnic tables not far from rink: shovel a path 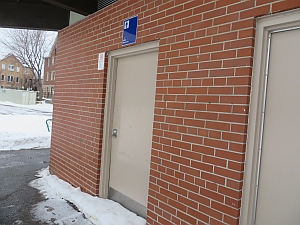 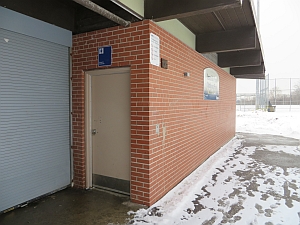 women's washroom just around the corner

At 2.30, there were four people skating at the rink.

At about 9.30 pm, a car was just leaving -- it contained staff from Thorncliffe Neighbourhood Office, who had just done a try-out of the ice surface. They said they had been flooding for about 10 days and were planning to flood for another 10 days before the rink was opened for the public. They felt that the unusually long flooding period would make the rink safer for skaters.

The ice looked a bit uneven but plentiful.