3pm- pleasure skating and about 40 people. Zamboni does ice in the middle of the pleasure-skating time. Schedules available to take home outside the door to the rink office. No campfire, rink office staff (1) says he doesn't do the fire. Hockey boxes need garbage cleared. Access to the rink office is very hard because of the ice that has built up between the rink and the office.

4pm - Campfire on and 60 people skating. You can ask the rink staff in the office for spare skate aids. They have duct-taped them where the bolts have gone. They have about 6 of 2 different types. Schedule is posted by the entrance to the rink. Rink change rooms are sex segregated but parents with kids don't seem to follow the rules. Men's and ladies' bathrooms are clean. Lockers in the ladies are 75% functional. Mats to and from the fire spot need cleaning of ice. The mats to the changerooms are in better shape. People can change by the fire which is nice, but a few more benches and a picnic bench would be great (and a garbage can!)

10.25 a.m.: The ice was shiny and smooth, with two skaters going around the perimeter. The change rooms were open and warm (drawback: the change rooms are remote from the rink, and windowless). There was a building attendant in a separate building, who said that -- unlike the rinks in the neighbouring ward -- the Kew Rink buildings do not stay locked in the mornings. When asked if school classes sometimes come in the mornings, he said they used to last year, but haven't started to come yet this year. 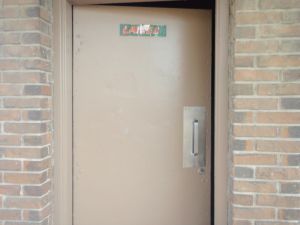 doors to change rooms are open from 9 a.m. 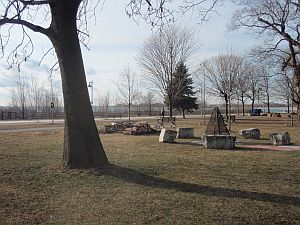 campfire cage is back, lots of firewood ready

10.15 a.m.: The rink was open, and the ice looked fine. There were about six shinny players, mostly young teens and a rink guard who was playing shinny with them. Rink guards know how to get the word out!

The rubber mats were all laid out to the washrooms/change rooms. So were the mats to the campfire site. It didn't have the fire cage in yet but the rink guard said it was coming. 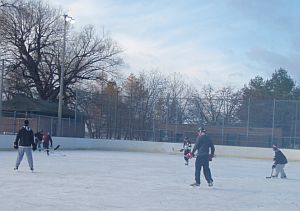