The rink was covered with a fine layer of slushy half melted ice when I arrived. There was nobody around accept for an unmarked van parked near the washrooms. There were still plenty of leaves on the pad, stuck underneath the ice or decomposing in puddles of water. 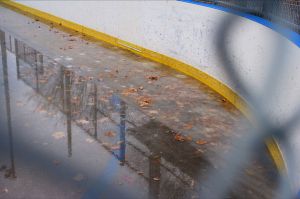 all those leaves will make the ice weaker 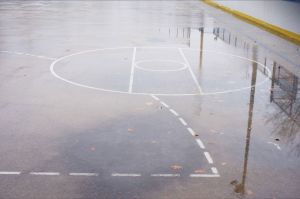 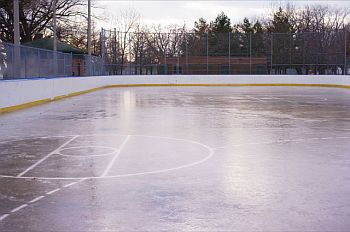 ice coming along, but leaves frozen into it

3pm: The pad at Kew was covered in ice, but there were still plenty of leaves beneath the ice. There was nobody around.

At 2pm there were 17 skaters, all leisure. Mostly young teens and pre-teens. Bollywood dance music playing for the skaters through a boom box on an extension cord. 4 skaters without helmets. Lots of spectators enjoying the scene.

3pm: 4 shinny players shooting the puck at pond nets. There was a lot of water on the rink but it was freezing up. The players had not seen a zamboni.

A number of families and a group of youth skated on the rink. The hockey nets had been removed and everyone seemed quite happy to practice passing and shooting, or chase one another for the puck. A group of youth played on one end of the rink. They said the ice was rough but they were glad to be out playing. One father was shovelling the rink. Good, easy to read scheduling information was posted on the bulletin board right outside the door to the rink.

Mats led to a men's and women's washroom, both of which were locked. On the other side (without mats), washrooms were open.

A woman at the rink told me that December 24 had been really busy right up until closing time. 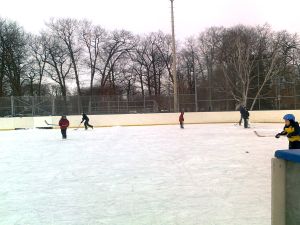 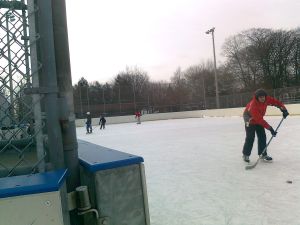 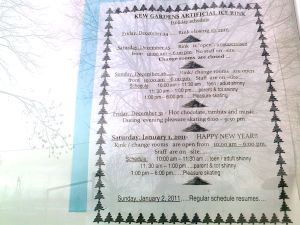 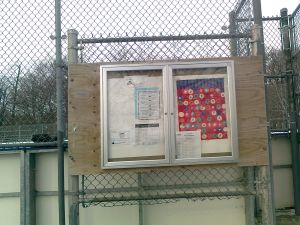 From the Beach Metro News:

There were some bumps, some tripping, and some roughing  all done by the notorious former NHL player Lou Franceshetti, of course.

Franceshetti was one of four NHL greats who joined the Balmy Beach Old Boys and officers from 55 Division on Feb. 26 to play a friendly match that not only honoured the life of Sgt. Ryan Russell, but also raised funds for his family.

Dan Daoust, Dennis Maruk and Bill Durlego were also on hand at the Kew Gardens Ice Rink to teach the younger guys how its done.

Its a great tribute to the family by the community together with the local police, said 55 Division Superintendent Sam Fernandes. [Sgt. Russell] was such a great hockey player and fan that a game in the local community would be a nice gesture on their behalf."

Whenever we get an opportunity to give back and were fortunate to be able to, then we like to do whatever possible. Those were the words of Balmy Beach Old Boy JP Cormier, a sentiment echoed by all the members of the club.

Everyone who was asked [at 55 Division] was more than happy to give up their time to come out and play for a good cause, said Cons. William Boag of 55 Division.

Sgt. Ryan Russell died on Jan. 11 while attending a call for a stolen snowplow that had allegedly hit several vehicles. He played goalie in a hockey league and his father was an officer at 55 Division.

At 5pm there were 5 skaters on the ice and one member of staff. The ice was surprisingly good considering the rink is fully exposed to the sun. The ice felt hard. It was a little rough and there was snow in the corners from skating. The northern edge of the ice must have been exposed to the sun the most. It looked more transparent, and had leaves embedded in it that had created an uneven surface when the ice hardened.