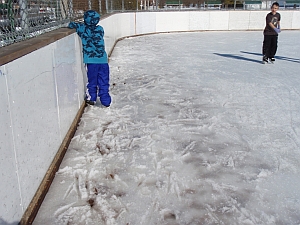 ice melted down to leaves along edge 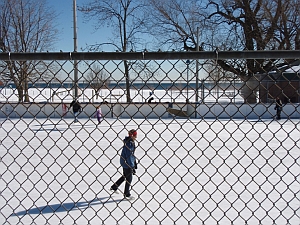 still skateable, with lake behind

4 pm: The rink has 10 people pleasure-skating, one rink staff inside windowless office. Ice is not bad except very slushy on the south-facing side -- the brilliant sun has melted it down to a layer of leaves, but not -- apparently -- down to cement.

5:30pm Pylons have been placed along the boards on the north side of the rink where the ice is melting. Most of the ice surface, however, is skateable. Twelve people are playing hockey, three adults and nine children. The children are wearing helmets, the adults aren't.

2:25pm There are 14 people on the ice, which is snowy but otherwise appears to be in good shape.

5:30pm A sign next to the staff room says Pleasure skating only, but in addition to 9 pleasure skaters, there are 4 boys playing hockey. The rink guard who is about the same age as the boys comes out and starts talking to them. They seem to be friends. The rink guard talks to one of the boys for a long time while the others continue playing hockey. One of the pleasure skaters is a child using a walker. He is wearing a helmet. The ice appears to be in good shape. There is a strong smell of marijuana in the men's washroom. More skaters arrive and when CELOS leaves there are twenty people on the ice including the hockey players.

I do appreciate the speedy reply, and the city councillor tip. Yes, that does sound like it would make a big difference - at least that way an attendant can see what was going on, or, a skater could get his/her attention without having to exit the rink.

One of the things that would be a big help at Kew is if the staff room had windows facing the ice. We had a similar problem at Dufferin Rink, and we go the City Councillor to find some funds to put in a window -- about $2000 (i.e. very cheap). That makes a huge difference.

Sometimes simple solutions do a lot. If you wanted to send this or alternative suggestions to your city councillor, Sandra Bussin, here's her e-mail: [email protected]

I'm writing to complain about an experience I had when I went out for `pleasure skating' between 2 and 4 p.m. at Kew Gardens rink yesterday. Several children, as well as a few accompanying adults, were on the ice with no skates. This made the situation uncomfortable for myself, as I'm sure it did other skaters, as all it would take is a collision with one of these kids to cause a serious injury. I saw the staff member for a moment when I first arrived, but then he locked himself away in his quarters for the remainder of the time. The adults didn't say anything to the children, and one encouraged a hockey game (kicking the puck around) between the kids with no skates, and the ones with. As the staff member was no where to be seen, I had to take my skates off in order to knock on his door to tell him there was a problem. To his credit, he was apologetic, but needless to say my skate was over at that point. Furthermore, when I go out for shinny hockey in the evenings at the same rink, I find I'm often putting my skates on in the changeroom while teenage players are smoking pot. Please, if someone is paid to monitor what is going on, is it too much to ask that they do just that?

Outside there is one person hanging around and 2 people pleasure skating, none were wearing helmets. The ice is good and was last done in the morning. It will be done again at 6pm. There is a lot of graffiti inside the building and outside the building. They have a copy of their schedule posted but none to take home.

11 am: The city's ice maintenance supervisor says the ice is fine but the rink staff say it's snow-covered -- light snow falling since dawn.

3 pm Rink locked up with 14 hockey players who climbed the fence. Half in helmets. No 'skate at your own risk' sign.

This rink looks as though there's been no maintenance in at least 24 hours..depending when it was last open.

No schedules up outside.

The ice is ok but we used to have scrapers at Kew Beach which we were allowed to clean the ice with when conditions called for it, which is usually.

For the last two years they have not been available but I am told they still exist somewhere. How do we convince Kew that we are not troublemakers but would like to have decent ice?

We don't want to lose our permit. (MF)