Open for the season

The rink is marked as open for the first time today.

This rink has never yet been listed as open although its posted schedule started at Dec.1. 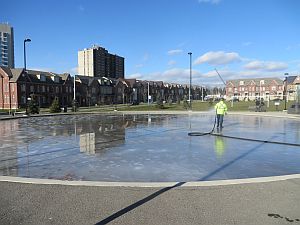 Two guys were working with hoses to flood the rink on Dec.4, and said they expect to open in a couple of days. But it wasn't listed as open until today (Dec.8). There was no signage up at the rink, about the delay.

This morning, for the first time in some days, this rink was listed as closed because of ice conditions. Since the weather is cooler today with no sun, it's unlikely that the rink has been listed correctly on most days.

At 10 a.m. after five hours of snowfall, this rink is still listed as open. Really?

This rink was listed as open for the first time today. The councillor's office never gave us a response to our query about why it was closed for so long.

This rink was set to open on Dec.3 and was even on the city list of the few rinks where taking pictures was allowed. But it has been listed as "delayed opening due to mechanical issues" every day since then.

We called the councillor's office to find out what the problem is (they said they would get back to us), and followed up with an email query:

"Is the problem that the builder -- Lindvest -- lacked the ability to construct a working rink even though that company seems to have been confident that they could do it? (See the link we posted to their letter of Sept.12, 2011.)"

This rink was listed CLOSED for all but a few days of the rink season for "technical issues."

The councillor's assistant says that Parks has said they are working on the pipes in some possibly "routine" maintenance operation. We questioned what would be routine about a rink be closed so often during the rink season. The assistant noted the lack of signage. He also said that they have received almost no residents' complaints (or maybe none at all) about the rink being closed.

This rink has no ice, and presumably there was a problem with how it was built, since it only rarely seems to be running. No sign anywhere to say why the rink is not running, possible remedies and when they are scheduled. 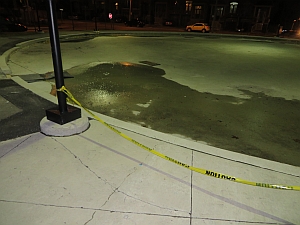 sagging danger tape, but no information 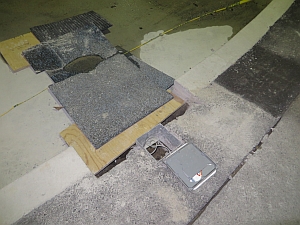 a hole with wires sticking upo

Marked as closed for "technical issues."

Listed as closed for "mechanical issues."

The city's website lists the rink as open today.

Councillor Mammoliti's office called to say there are unspecified mechanical problems at the rink, but they expect it to open early next week.

The city's 311 skating schedule lists the skating hours at this rink from 9 am to 10 pm. But actually this rink is still without any ice. As is usual at the city's outdoor rinks, there is no sign on the door telling why the delay. But there is a truck parked next to the building. Maybe someone is inside, repairing -- although there is no other sign of activity and no sounds from inside the building either. The truck is from "Custom Ice Rinks," a Burlington company. That's a puzzle too. This rink is listed under the Etobicoke (west) city administrative region, which has a maintenance contract with CIMCO. Maybe Joseph Bannon Rink is an exception -- but not an impressive one at the moment. 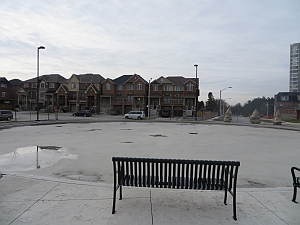 no ice-making on this round rink pad here 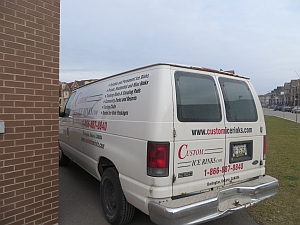 This rink is located in a park framed by a new subdivision. It has a lot of "thou shalt not" signs. This is yet another example of a promising structure that is not being used up to its potential.

In the afternoon, CityRinks called City Councillor Mammoliti's office to find out when the rink will open and what has caused the delay. Awaiting an answer. 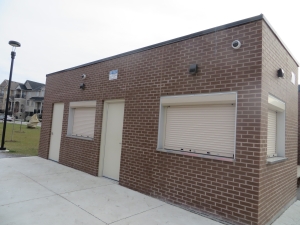 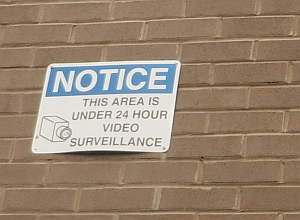 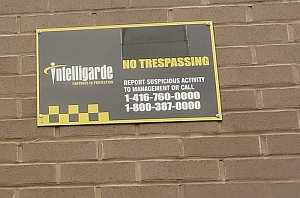 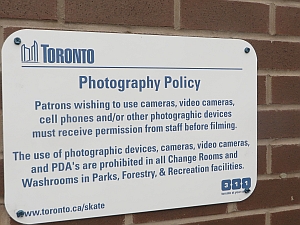 This rink was supposed to open, but it never did all weekend. Strange, since this rink was one of only four rinks specifically designated in the city's rink opening press release, inviting the media to come and take pictures:

There is no recorded information on how much this rink cost to build. 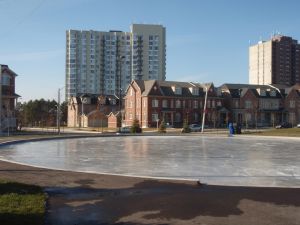 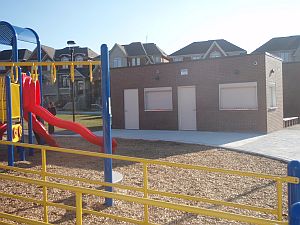 cubbyholes to put shoes while skating 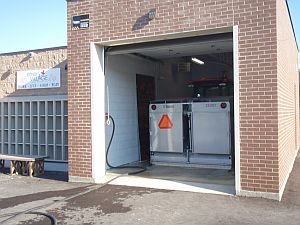 this little rink has a zamboni garage 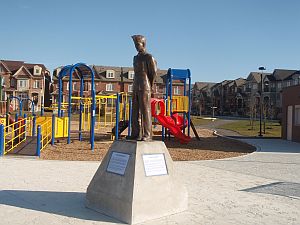