The "Hockey in the Neighbourhood" program is held every Saturday. Yesterday there was a big snowstorm. The program staff asked the maintenance supervisor if they could be dug out first on Saturday. By 12 noon they had their rink back, and they were able to run the program right on schedule.

8 shinny players, without any helmets. A family asks for skates and a helmet but neither are available. Another group of people complain that the online brochure schedule is incorrect. Schedules are available on site for anyone to pick up and are posted.

There is broken glass and a broken fixture in the men's changeroom. The women's is locked up. Jimmie Simpson has also had a rebuild from Home Depot and the Maple Leafs, including new plastic boards. Are these boards louder than the old ones? Staff report that the new boards require almost daily maintenance.

Although the mats are great, the path to the rink is still covered in snow. There are no benches outside. Staff can't see the rink from their office, which faces in the wrong direction and has no window anyway.

The ice is in very poor shape, staff say they get maximum one scrape and flood per day usually in the early morning. Because of the rain and snow about 2 inches of ice has built up in mounds around the edges of the rink. They need the edger.

At 6 pm there were nine kids on the ice, and it was pleasure-skating time. Seven of them were playing British Bulldog. At the edges there was a teenage girl and her much younger sister, trying to stay out of the way. I took a picture of the rink and right away a couple of the kids started yelling about taking pictures. I tried to tell them that they were just tiny stick figures in the pictures, with their backs to me, way down at the other end of the rink. But shouting at me was too interesting to stop for facts. One kid in particular wanted to tell me that his mother weighed four hundred pounds, stood six feet tall, was an "oreo," and would beat me easily. He said that if there was any picture of him on the website, he would shoot me with a supersoaker, "only it won't have water in it."

At this some of the other kids quietened down a bit, and then they resumed their game.

Inside the windowless rink change area there was fresh paint and a new rubber floor. After a few minutes, the teenage girl and her sister came in and took off their skates. They said it was no fun trying to skate with those kids around because they were on-purpose trying to hit them. Another women in the rink house said those kids are there all the time and that they bother everyone and last week were all banned for a few days, for spitting at other skaters. 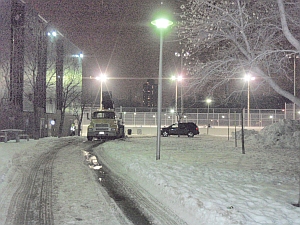 an island of light in the winter darkness, tilt-and-load in front

Back outside, there were excellent new mats for going from the rink house to the ice. The zamboni truck came up and unloaded, with a huydraulic system that looked much like the dumpster trucks. The zamboni driver said they like that "tilt and load" truck because it's much easier on their backs than a trailer, although their flying squad has a trailer too. He said they used to have two tilt-and-loads, and had even arranged for one of them to be modified to be more useful. But as soon as it was out of the shop, he said, it was requisitioned by the West rinks, and they had never seen it again.