Last Saturday at the rink an idea popped into my head about how to spend rink reno dollars. When you approach the rink on foot you'll notice that you can't see the skaters very well because the ground is lower outside the boards. I can barely see over the boards, even when I'm standing right beside them. The rink would be more accessible and welcoming if there were a deck built along the south side, from the west entrance along the south side, as far over as the benches go. The deck should come out about 6-8 feet (this should leave adequate room for zamboni) and they could build a bench along the outside of the rink boards for the length of the deck. Matting could be laid on the deck to protect the wood from skate blades during the rink season. I could draft a plan, if you like.

There is another item that I think should be at the top of the list. I think it is really important to do something about the washroom doors, as the current use of the changerooms area is totally incompatible with the floorplan. I was going to use the women's washroom on Saturday, but changed my mind because one of the dads was in there! The privacy issue really needs to be dealt with as a priority. Embarrassment at realizing one is walking thru the other gender's washroom area on entering or leaving the changeroom is the kind of thing that discourages skaters from using the rink at JS. The facilities people need to put doors and signage on the washrooms to separate them from the currently unisex traffic routes at the entry points to the changerooms and provide some privacy. The doors separating the entry/washroom areas from the changerooms could simply be moved, they wouldn't have to buy new doors. They may have to build a small wall on the men's side to fill in the gap.

Once this urgent job is done, the way is clear to get exterior doors that are fitted with windows (as large as possible). We also still need a window on the door to the rink office.

Can you pass this along to facilities?

I can tell you they've moved a picnic table over to the rink area, but there is no matting in that area. (Heather O'Meara, JS advisory council chair)

Windows and signage:Neither the staff room nor the changerooms have windows. Signage is just pieces of paper, so it's hard for new rink users to find staff.

Benches for skaters: insufficient number, so skaters sometimes have to change sitting on snowbanks. 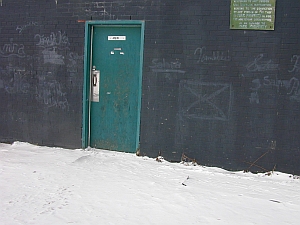 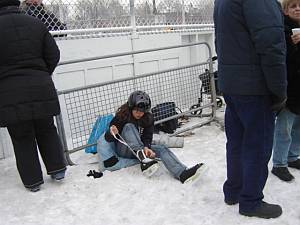