Question from a rink user: "I was hoping you could resolve an issue I ran in to a few times last year with arena staff. During non scheduled hours, for example 9.30-2 Thursdays at Irving Chapley when there is nothing scheduled between those hours, am I allowed to bring my stick and a puck on to the ice to shoot around with my friends (we're 25 years of age)."

From cityrinks: "Five years ago the head of Parks directed rink staff to make the rinks freely available for skaters when a rink doesn't have a permit or a program (for example, most of the daytime).

Does Irving Chapley now have a schedule posted on the fence? Is Thursday 9 to 2 posted as shinny time? If it isn't on the schedule like that, but that's a good time for you and your friends, and the rink is normally empty Thursday daytime, the schedule should be changed to accommodate you. Rinks change their schedules all over the city -- the staff just modify the signs with a piece of tape.

Irving Chapley is one of the least used rinks in the city, which is a shame since it's a great little rink. If the onsite staff don't welcome your group, the next thing is to ask your city councillor to help: [email protected] or (even better) 416-392-1371."

Good ice. Five shinny players were enjoying themselves around 11 a.m. Only one of them was wearing a helmet, and skated up to me when I took the rink pictures. He was probably the rink guard (they get in trouble if they don't wear a helmet), coming up to tell me that I'm not allowed to photograph. But he missed his opportunity, so he went back to playing.

This rink, like the other North Toronto rinks, was on the schedule as opening tomorrow, Nov.24, but that seems to have been a mistake. It's lucky that there was a rink guard to let his friends know to come down, the rink was open! 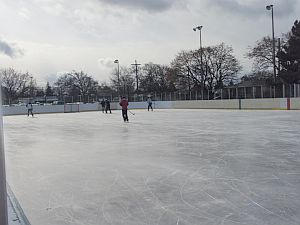 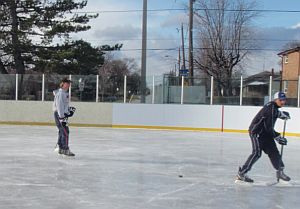